Carrying His Secret by Marie Ferrarella 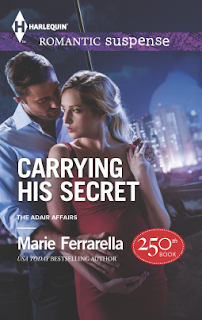 When Elizabeth Shelton finds her boss murdered, her life is thrown into turmoil. But nothing shocks her more than learning she's pregnant by the man's son. She kept her attraction to mogul Whit Adair hidden for years before their one-night tryst—and now she must keep another secret…

When the killer targets her next, Whit goes from her one-time lover to her full-time bodyguard. Taking her to his ranch for safekeeping, Whit discovers the truth about the baby. He offers his protection, but Elizabeth wants more—his love. For his child and its mother, he'll do anything—even take down a murderer…
Series: Harlequin Romantic Suspense\The Adair Af (Book 1835)

4 stars
Wow Congratulations on 250th book! I want to read the next book about the Adair family. Lots of suspense, there is one storyline that continues onward. I have couple ideas about but don't know anything. There are two other mysteries in the story who killed Reginald Adair and who is trying to harm Elizabeth.

I like the Adair children of Reginald that we have met. They sure are welcoming to Elizabeth in there home. I would like to see more of them.

Elizabeth had left some papers at the office and went back for them. The building was empty but she saw her boss had left his light on. She entered to check because he was supposed to be on a plane. Instead she found him dying on the floor.

Elizabeth has no family and she just found out she was pregnant and the boss's son was the father. She was going to hold off telling him. It was only a one night stand.

Whit was shocked that his dad was murdered. He was also mad the police were holding Elizabeth as a suspect because she found the body. Whit was not close to either parent. He has not stopped thinking of Elizabeth and when someone slashed all four tires he brought her home to the family ranch.

There is lots of drama, suspense, a few love scenes, some action and a fast read that leaves you wanting to read more about the Adair family. I did figure out who was trying to kill Elizabeth early, but I think we were supposed to.

I was given Carrying his Secret by Net Galley and Harlequin. In return I agreed to give a honest review of it.