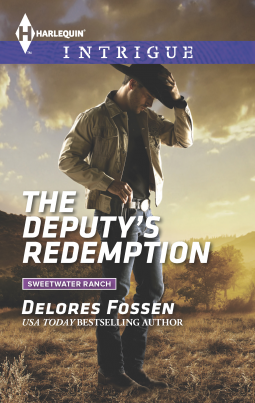 A Texas lawman risks his future to protect a woman from his past in USA TODAY bestselling author Delores Fossen's latest Sweetwater Ranch book.

The woman fleeing a cold-blooded killer is no stranger to Deputy Colt McKinnon. Fourteen years ago, Elise Nichols was the love of his life. Now she's back in Sweetwater Springs—to be the star witness in an upcoming murder trial that could tear the Texas lawman's family apart.

With her explosive revelations certain to rock the town, Elise didn't expect to be welcomed home with open arms. Certainly not by the cowboy with the badge who once meant everything to her. But after being run off the road and shot at, she has no choice but to trust him. Even more dangerous is the desire that's reigniting, making Elise yearn for something she may not live to see.
File Size: 331 KB
Print Length: 224 pages
Publisher: Harlequin Intrigue (March 1, 2015)
Sold by: Amazon Digital Services, Inc.
Language: English
ASIN: B00OY9Z9UY

My review: The Deputy's Redemption by Delores Fossen

This is the fifth Sweetwater Ranch book.  They are all have to do with a mystery  of who committed a murder years ago.  The Prime suspect is Mrs. McKinnon.  She has returned to face charges.  The other suspect is Mr. McKinnon.  The children are all in law enforcement and taken sides.  The three boys side with their father and Mrs. McKinnon took her twin daughters to raise. So they and their step brothers believe she is innocent.

Elise has moved back to Sweetwater.  She has come forward as a witness placing Mr. McKinnon at scene of the murder when she was nine.  She was good friends with Colt but moved away from town when she was eighteen.

Colt McKinnon is a deputy in Sweetwater.  He believes his father is innocent, but not his mother.  Colt sees Elise running in the middle of the forest. Elise believes Colt is trying to kill her.

I really want to find out who the murder was.  I missed reading the last two books in this series and I want to catch up and read them.

I was given this ebook to read by Net Galley and Harlequin.  In return I agreed to give a honest review of The Deputy's Redemption.