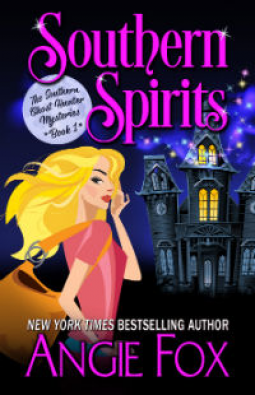 One simple mistake...
It really didn't look "that much" like an urn.
For a girl about to lose her family home.
So she dumped it out onto the rose bushes and rinsed it with the hose.
Releases the ghost of a long-dead gangster.
He really didn't have to be so rude about it.
And opens Verity Long's eyes to a whole new world...
When out of work graphic designer Verity Long accidentally traps a ghost on her property, she’s saddled with more than a supernatural sidekick—she gains the ability see spirits. It leads to an offer she can’t refuse from the town’s bad boy, the brother of her ex and the last man she should ever partner with.
Ellis Wyatt is in possession of a stunning historic property haunted by some of Sugarland Tennessee’s finest former citizens. Only some of them are growing restless—and destructive. He hires Verity put an end to the disturbances. But Verity discovers there’s more to the mysterious estate than floating specters, secret passageways, and hidden rooms.
There’s a modern day mystery afoot, one that hinges on a decades-old murder. Verity isn't above questioning the living, or the dead. But can she discover the truth before the killer finds her?
This is book #1 in the new Southern Ghost Hunter mystery series.


My review: Southern Spirits  by Angie Fox (Southern Ghost Hunter Mysteries #1)
4 STARS
This is a charming, funny mystery.  I laughed and smiled while reading it.  The characters are both alive and dead. Even a skunk as a pet.
Verity Long is the main character.  She is going to lose her family antebellum home in one day unless a miracle happens.  She has sold most of her possessions to try and keep it.  She has one dirty vase left from the attic.
Verity washes her vase and by doing that she trapped a ghost to her vase and to her house.  Frankie was a mobster.  He wants to help her to save her house.  He makes it so she can see and talk to other ghosts.
She gets a job to help get rid of ghosts on a estate from her ex-fiancé's brother Ellis.  Ellis is a policeman.  He is also restoring a old estate that used to be  Southern Spirits.  Someone is vandalizing his estate but when he put up cameras to catch them all he got was seeing things torn up by themselves.
Ellis does not want to ask Verity for help.  He believes his brother saying she was a gold digger.  When she called off the wedding the day of it.  When Verity told him that she talked to his Uncle's ghost and told him where he left his lighter and Ellis found it, right where Verity had told him. He hired her.
Verity found lots of ghosts but there was also real danger out there too and he wanted them gone or dead.
The setting for this book is Sugarland, Tennessee.
I did not want to put the book down till I had finished reading Southern Spirits.  I would love to read more Southern Spirits books.
I was given this ebook to read by Net Galley and Season Publishing . In return I agreed to give a honest review of Southern Spirits.
Posted by rhonda1111 at 1:25 PM