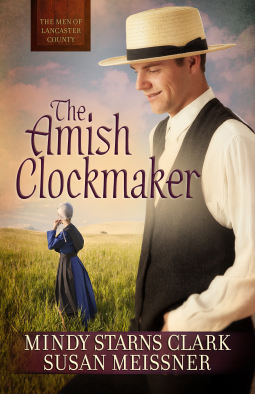 From bestselling authors Mindy Starns Clark and Susan Meissner, The Amish Clockmaker (Book 3 in the Men of Lancaster County series) explores the men of an Amish community in Lancaster County, how their Amish beliefs play out in their unique roles, and the women who change their lives.
Newlyweds Matthew and Amanda Zook are just settling into their roles as managers of Zook Feed and Tack when an old but beautifully ornate clock is discovered during a store remodel. After examining the clock, they discover a secret that indicates it belonged to the former owner of the building, the Amish clockmaker Clayton Raber, who, fifty years earlier, was arrested for the murder of his wife.
The shocking elegance of Raber’s clock, the love poems about his wife found inside, and the fact that the clock had been hidden, compel Matthew—against Amanda’s wishes—to seek out Raber. Matthew believes he is following God’s will in this. But is the old man still alive? Why did he create something so obviously against Amish standards? Why was the clock hidden? More importantly, is it possible the love poems prove that this Amish clockmaker loved his wife to the community that never believed his claim of innocence?
A timeless novel of truth, commitment, and the power of enduring love, where secrets of the past give way to hope for the future.
My review: The Amish Clockmaker by Mindy Starns Clark and Susan Meissner (The Men of Lancaster County)
4 STARS
This is the third book in the Men of Lancaster County.  It tells the story through two different Amish men point of view.  I wanted the story to go on.  I admitted I liked the ending I just wanted another couple of chapters. I did shed some tears in the last few chapters.
There is a lot of drama in the two stories that take place 50 years apart but the past story has a major impact on the currant story.  Mathew Zook is a newlywed and is in charge of the family business. He is going to extend his family hardware store to save the business when he finds out that the land he is going to build on.  The hotel which is going up thinks that they are going to buy that land and wants Mathew Zook to stop his building.  He needs to find Clayton Raber.
Clayton Raber was arrested for killing his wife.  Everyone believed that the Amish clockmaker got away with the murder.  Mathew was raised in same bedroom that Clayton was raised in and believes he was innocent.  No one knows where Clayton had moved to after the cops let him out of jail and dropped the case.
I liked the characters and wanted Clayton to have a happy ending.  His story was sad.   I also wanted Mathew to save his family business.  Both stories made me feel with the characters.
The story is set in the Amish Lancaster county.  A mix of Amish and English.
This is a clean read. A gripping story.  Of characters that have a struggle to live what they believe.  Some have weakness that you can see others you see trying to accept God's will.
I was given this ebook to read by Net Galley and Harvest House Publishers    . In return I agreed to give honest review of the Amish Clockmaker.
Posted by rhonda1111 at 6:13 PM