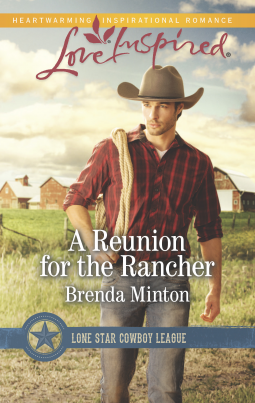 As president of the Lone Star Cowboy League, rancher Carson Thorn is committed to serving his community of Little Horn. But when high school sweetheart Ruby Donovan returns, his steadfast pledge is tested. Ruby left town twelve years ago—stealing money from his father and breaking Carson's heart in her wake. Now she's asking for his trust—just as her brother becomes Carson's prime suspect in the rash of recent ranch thefts. Carson is torn. His town is depending on him for justice, but one look in Ruby's eyes has him questioning everything he thought he knew—about truth, about love and about the wisdom of second chances…

My review:  A Reunion for the Rancher by Brenda Minton (Lone Star Cowboy League)
4 stars
This is the first book of the Lone Star Cowboy League.  It did a good job of introducing us to a lot of characters, mysteries  and problems of Little Horn so that you want to read more of the series and see what happens next to them.  There was plenty of drama, cute little child, romance and a clean Christian read.

Carson Thorn   is a rancher, single and President of Lone Star Cowboy League.  They are dealing with cattle rustlers and thieves.  He had his heart broke years ago by Ruby who took a check from his father to go away to college.

Ruby Donovan has come back to try and save her family ranch.  Her brother has come back from prison where he stole when he was 18.  Her grandmother basically raised them and now her health is failing her.  Carson and his family hurt her and broke her heart.  She has never married.

Derek Donovan now a ex-con is believed by some to be the cattle rustler. Derek says he has changed but a lot of people want him arrested.

Brandon is a cute five year old.  His mother Jenna left him with his Uncle Carson with no notice.

I want to find out more about Little Horn, who the rustler is? Who is the person leaving gifts to people who need them?  What happened to Ben?  It looks like it will be a good series to read.

I was given this ebook by Net Galley and Harlequin.  In return I agreed to give a honest review of A Reunion for the Rancher.