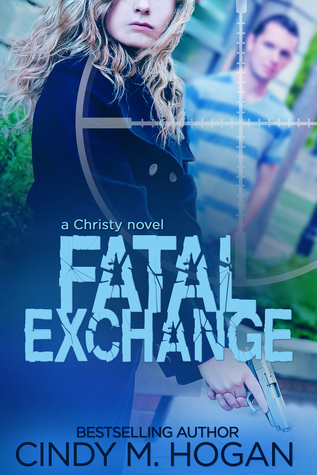 For 19-year-old Christy Hadden, it’s life as usual as a spy, only this time in Paris, France. Her mission: retrieve a flash drive containing evidence that a high public official is working to destroy Paris. Pretty standard, until someone steals the drive from her. Forced to abandon her position protecting the informant, she goes after the thief, but returns empty handed—only to find her informant dead.

Christy's failure taints her reputation at Division and the director has lost all faith in her. But Christy isn't one to slink into the shadows. Alone and disgraced, she decides to track down the drive and solve the murder, not only to redeem herself as a spy, but to give meaning to her informant’s sacrifice, and perhaps even save Paris.
Suspenseful, with the right amount of romance, and awash with action, Fatal Exchange will send you on a thrill ride that will be hard to forget.

My review: Fatal Exchange by Cindy M. hogan
5 STARS
I was excited to read the next Christy book.   This is the third book in the Christy series.  But before that Christy was in three Watched series.  So her character is well built, but she is always learning changing and saving people.
It is full of drama, action, zest and danger in a high energy novel plus a clean read..  I hated to put the book down.
This time Christy is in Paris, France.  She is a spy for division.  Her mission is to meet someone who is going to drop information on the train but something goes wrong and she loses the information and the informant is murdered.
Christy is dressed down and kicked off the case.  She is only 19 years old.  Her handler Jeremy has been on a different case for past 4 months and can't be reached.  Christy decides she can't just let the case go she is determined to find the flash drive.
You never know what Christy will look like next time you see her.  She is smart, fast thinker and reacts fast to the different situations.
This has a lot of twists and turns.  Some I guessed at others took me by surprise.
It makes you think to be a little more aware of your belongings.  How easy and fast pick pockets can be.
I will keep reading Cindy's novels they are always smart, fun to read.
I was given this ebook to read for free and in return I agreed to give a honest review of Fatal Exchange.
Posted by rhonda1111 at 9:41 PM