Miz Scarlet and the Perplexed Passenger by Sara M. Barton 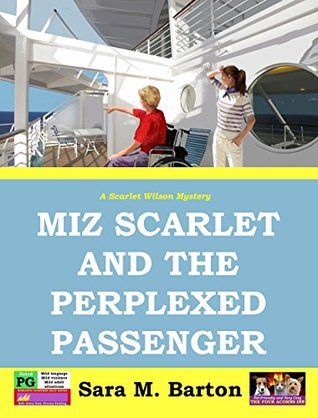 Sail away with Book #5 in the Scarlet Wilson Mystery Series....When innkeeper Scarlet Wilson is asked to accompany her wheelchair-bound mother on a five-night cruise to Bermuda, she expects to have a trip to remember. Boy, will she remember this one!

Laurel Googins Wilson's new beau, Dr. Thaddeus Van Zandt, and Scarlet's old high school flame, Kenny Tolliver, join the women as they set sail for paradise. While Scarlet loses herself in a good book on the balcony of their stateroom, poor Laurel witnesses the deadly plunge of a fellow passenger into the Atlantic Ocean. "Man overboard!”

It's the start of a nightmare that may never end. Who would want to kill George Delaney, the respectable funeral director from Caulkins Cove, Maine, on a cruise to Bermuda? While Kenny, an experienced investigator, joins forces with old school chum Marley Hornsby, now the security chief for the cruise line, and the cruise ship's security team, to find the killer hiding in their midst, the amateur sleuth known as Miz Scarlet can’t resist diving into this mystery. But this isn't a killer who wants to be found. He's dangerous...he’s desperate...and he’s plotting to kill again!

As the ship approaches Bermudian waters, the widow finds herself a suspect in her husband's murder. Did she do it? Miz Scarlet and her cohorts don’t think so. But how can they prove that Kathleen Delaney is innocent? Time is quickly running out. As soon as the ship docks at King's Wharf, the FBI plans to take their only suspect into custody.

Working late into the night in their frantic search for a murderer, the feisty Miz Scarlet and her dashing, determined heartthrob follow the clues left behind by the dead man, desperate to identify the next victim. One catastrophe after another draws the travel companions deeper into the dastardly intrigue, and the closer they get to the truth, the harder the murderous fiend fights to distract investigators with his razzle dazzle bag of tricks. Suddenly Miz Scarlet finds herself facing the wrath of a devious, dangerous stranger. Can she stay alive long enough to figure out what the killer's end game is?


My review:  Miz  Scarlet and the Perplexed Passenger by Sara M. Barton

Scarlet Wilson runs a bread & breakfast.  She is also the caretaker for her mother Laurel Googins Wilson who is in a wheelchair.  She is called Miz Scarlet a nickname taken from Clue.

Laurel as been a widow for decades.  She has a new boyfriend. She needs the time because of all the uproar the past year.

Kenny Tolliver a security expert. An old high school flame of Scarlet in high school that just reconnected and moved back.

Dr. Thaddeus Van Zandt a retired Doctor who just got through with cancer treatment.

The two couples have come on a 5 day cruise to Bermuda.  Miz Scarlet and Kenny are glad to get away too.  The first day on the cruise and Laurel sees someone jump past her room into the ocean.

The cruise security thinks the wife did it.  They are not interested in looking for others. Kenny and Miz Scarlet are willing to look fast for more.  The head of security is a old friend of Kenny's and tells them to go ahead.

Scarlet is smart, curious and figures out a lot of the clues.  Even though she is not trained.  I really like her.

I was offered a free copy but could not figure out how to get it to my kindle so I just went ahead and bought it from Amazon because I like Sara M Barton's mysteries.
`