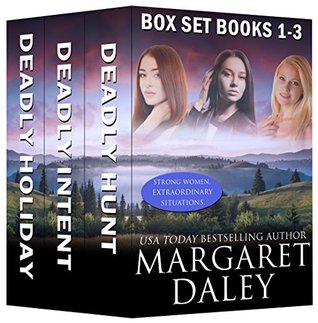 Deadly Hunt: All bodyguard Tess Miller wants is a vacation. But when a wounded stranger stumbles into her isolated cabin in the Arizona mountains, Tess becomes his lifeline. When Shane Burkhart opens his eyes, all he can focus on is his guardian angel leaning over him. And in the days to come he will need a guardian angel while being hunted by someone who wants him dead.

Deadly Intent: Texas Ranger Sarah Osborn thought she would never see her high school sweetheart, Ian O'Leary, again. But fifteen years later, Ian, an ex-FBI agent, has someone targeting him, and she's assigned to the case. Can Sarah protect Ian and her heart?

Deadly Holiday: Tory Caldwell witnesses a hit-and-run, but when the dead victim disappears from the scene, police doubt a crime has been committed. Tory is threatened when she keeps insisting she saw a man killed and the only one who believes her is her neighbor, Jordan Steele. Together, can they solve the mystery of the disappearing body and stay alive?

This is three books that have been reissued together.  They are full of mystery, action, romance and Christian stories.  They are short entertaining and a clean read.  I read all three right after each other.

Tess Miller is a bodyguard.  She usually guards women and children.  She is on vacation at her Uncle's cabin by herself when someone crashes into the cabin.  He is bleeding and passes out.
Shane Burkhart would not have survived if he had not found help.  He does not know why someone would shoot him.
Lots of twists and not sure who wants Shane dead. They both have issues they need to workout.  I liked it.
Deadly Intent
Texas Ranger Sarah Osborn is asked to help with cattle rustling case.  She also needs to go see if a horse theft is part of it. The only problem it is at her old boyfriend's ranch.

Ian O'Leary has come back after his father's death to run the ranch.  He has left the FBI.  He joined after 9/11 where his friend had died.  He broke thinks off with Sarah badly back then.
Now someone is out to ruin him.  He has made plenty of people mad at him.

Tory Caldwell witnessed a hit and run.  She had to go down the mountain before she could call it in.
When she and the police made it back.  There was no sign of anyone dead.  There was blood on the road.
Tory did the right thing.  Now she is being harassed, framed and everything is going against her.
No one believes her but her neighbor Jordan Steele.  He has the skills to help her.

This last story made me frustrated with the cops. But I liked how it ended.

I would like to read more books by Margaret Daley in the future.  I bought this box set for .99 cents.