Fires of Invention by by J. Scott Savage 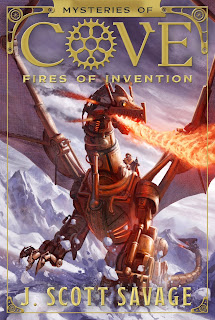 Trenton Colman is a creative thirteen-year-old boy with a knack for all things mechanical. But his talents are viewed with suspicion in Cove, a steam-powered city built inside a mountain. In Cove, creativity is a crime and “invention” is a curse word.
Kallista Babbage is a repair technician and daughter of the notorious Leo Babbage, whose father died in an explosion—an event the leaders of Cove point to as an example of the danger of creativity.
Working together, Trenton and Kallista learn that Leo Babbage was developing a secret project before he perished. Following clues he left behind, they begin to assemble a strange machine that is unlikely anything they’ve ever seen before. They soon discover that what they are building may threaten every truth their city is founded on—and quite possibly their very lives. 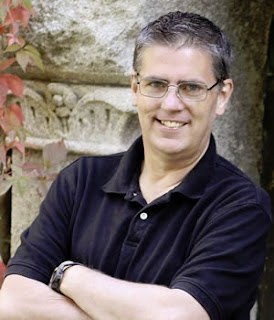 Author Bio:
J. Scott Savage is the author of the Farworld middle grade fantasy series and the Case File 13 middle grade monster series. He has been writing and publishing books for over ten years. He has visited over 400 elementary schools, dozens of writers conferences, and taught many writing classes. He has four children and lives with his wife Jennifer and their Border Collie, Pepper, in a windy valley of the Rocky Mountains.

My review:  Fires of Invention

I did not want to put the book down. I wanted to see what would happen next.  I was drawn right away into the adventure.  It is a exciting, clean read filled with drama.

The setting of this book is a society that lives inside a mountain.  Never going outside because the air was toxic and full of diseases.  They are a society that it is wrong to be creative and invent anything not on approved lists. Trenton does not fit in.
If you look at it you can see how restricting creative, discovery, inventions and books you can control most people.   The idea that people are punished for drawing is unreal, but some are really not allowed the freedoms to do that.

I would hate to be told what foods to eat what day, what job to train for no matter you are more fit for another job.

I like how Trenton Colman a thirteen year old was smart and always thinking.  He wanted to help people. he was curious, loved machines and wanted to learn more about them.  He also was a hard worker.

Kallista Babbage her father was someone who did not fit in.  He is held up as a wrong example a inventor that killed himself and others by his invention.  He had secrets.  She wants to find out the information he leaves. She has no friends.

Kallista and Trenton follow the clues to find and build what her father left clues for and learning more about there world as they do.

This was a book that I want to read the rest of the series now. I would read more books from J. Scott Savage.

I was given this ebook from Shadow Mountain Publishers and Netgalley.  In return I agreed to give honest review of Fires of Invention.

Thanks so much for the great review. I'm so glad you enjoyed it!