Deep in death
by Colleen Helme 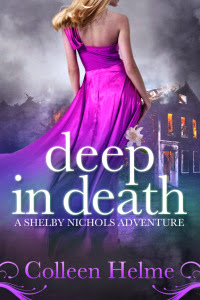 Running “errands” for her mob-boss employer, Joey “The Knife” Manetto, often ends with Shelby in trouble, making her cautious about continuing her association with him. Instead, she focuses on a new client who hires Shelby to find her missing mother. What seems like a routine case turns into something more sinister and deadly than she ever imagined.

In the meantime, Uncle Joey has summoned Shelby to his office, where she runs into her former nemesis. Shelby inadvertently hears something that makes her fear for the lives of Uncle Joey and his hit-man, Ramos. This time, Uncle Joey is not sure he wants to involve Shelby in something he knows could get her killed. Keeping Shelby’s involvement to a minimum has disastrous results, sending Shelby on a dangerous path. As her investigation unfolds, Shelby finds death at every turn, and soon realizes she is in over her head. Can she escape from danger in time? Or will she find herself deep in death?

As the author of the Shelby Nichols Adventure Series, Colleen is often asked if Shelby Nichols is her alter-ego. “Definitely,” she says. “Shelby is the epitome of everything I wish I dared to be.” Known for her laugh since she was a kid, Colleen has always tried to find the humor in every situation and continues to enjoy writing about Shelby’s adventures. “I love getting Shelby into trouble…I just don’t always know how to get her out of it!” Colleen lives in the Rocky Mountains with her family. Besides writing, she loves a good book, biking, hiking, and playing board and card games with family and friends. She loves to connect with readers and admits that fans of the series keep her writing.


My review: Deep In Death by Colleen Helme

I love reading Shelby Nichols Adventure. I smile while reading it. I like the characters. She seems real. Plot is over the top. It brings smiles too. It is a pretty clean book.

Shelby Nichols is a married woman with two children. She was shot in the head and since than she can read people thoughts. Just a few know she can do that. Most think she gets visions of the future. She helps the police and mob. She also opened her own office.

Uncle Joey is the local mob boss. He has blackmailed Shelby to help him. He has started to care for her.

Ramos his Uncle Joey hit-man and right hand. Ramos has figured out what Shelby can do. He likes her and flirts with her in his head.

Kate is really Uncle Joey's niece. She does not like Shelby. Kate knows the truth about Shelby and insults her in her head.

Chris is her husband. He is a lawyer. Sometimes he gets in trouble with what he is thinking about his wife. He hates that she gets in dangerous situations. He does not like Uncle Joey.

This book takes place three weeks after the last book. When Shelby got shot in the arm.

Shelby has been hired to find out about a missing mother. She disappeared six years ago. When Shelby goes to look at the police files she has a weird feeling that someone is in the room with her. Cops don't like going in that room either.

Uncle Joey has a party and invites Shelby and Chris. Also asks her to meet Kate for lunch and read the man with her. Find out if the merger is a right or if she can not trust him.

Colleen makes likeable characters. I was rooting for Uncle Joey and Ramos to survive. Uncle Joey & Ramos don't want to put Shelby in danger anymore. In fact Ramos has saved Shelby's life more than once.

A lot of the humor of this book is due to what Shelby's reads in others minds. That after reading this series made me realize I do not want this super power.

I have read the whole series and hope their will be more books in the future.

I have been given this ebook to read and in return I agreed to give honest review and be part of its blog tour.

September 2 – Cozy Up With Kathy – Interview

September 11 – Escape With Dollycas Into A Good Book – Spotlight

Absolutely love this series. I adore Ramos but of course Shelby can't have him, she has a great husband. Can;t wait to read Deep in Death. I like to cover to; very nice.

Absolutely love this series. I adore Ramos but of course I know Shelby can't have him, she has a great husband. Can't wait to read Deep in Death. I like the cover too, very nice.

a new-to-me series/author!!
thank you for the intro & the giveaway!!