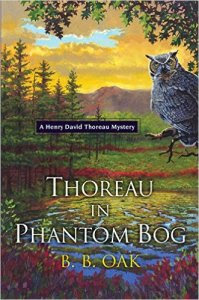 Henry David Thorea’s impassioned activism in the Underground Railroad leads him away from the banks of Walden Pond into a morass of murder…
In the spring of 1848, Thoreau returns to Plumford, Massachusetts, in search of a fellow conductor on the Underground Railroad, who has gone missing along with the escaped female slave he was assigned to transport. With the help of his good friend, Dr. Adam Walker, Thoreau finds the conductor—shot to death on a back road.
When the two men discover that Adam’s beloved cousin Julia has given the slave safe harbor, their relief is counterbalanced by concern for Julia, who has put herself in grave danger. Another conductor has been murdered in a neighboring town and a letter has been found from someone claiming to have been hired to assassinate anyone harboring fugitive slaves. With all of them now potential targets, the need for Thoreau and Adam to apprehend the killer is more urgent than ever… 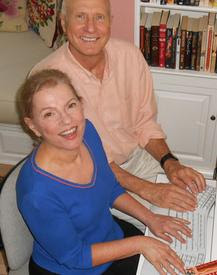 My review: Thoreau in Phantom Bog by B. B. Oak

This was a good mystery, romance, historical novel.  This is the third book in the series but the first one I have read, but hopefully not the last.

I really enjoyed the personal touch to the Underground Railroad that we get a look at.  We also get a glance at Slave trade.  They are woven into the story and draw you into the story.

Henry David Thoreau's character is a conductor on the Underground Railroad.  His family owns a pencil factory.

Dr. Adam Walker is having an affair with his cousin Julia.  He wants to marry her but she married someone else in France when she thought she was his first cousin by blood.

Julia  is married but her husband is older and still in France.  She left him when she found out he made his money as a slave trader.

The setting is spring of 1848,  Plumford, Massachusetts

Henry & Julia has come to find out about a missing conductor and his cargo.  He finds the man by Phantom Bog shot to death.  His cargo missing. Julia gets Adam to come look at the body.  When the police are not going to look for the cargo or try and find the murder then Henry and Adam will look into together.

Julia wants to have her house be on the Underground Railroad.  She feels bad that her husband was such a slave trader.

The story is very analytical.  Told from scientific facts about the murder.  It really leaves the emotion out of the story.
I am glad that slavery is mostly stamped out.  I wonder what side I would come out on?  Looking back you can see how wrong it is but those born to as part of there life seemed so easy to expect it to continue.  Would I be brave enough to offer to hide slaves?

The mysteries are simple for the most part.  It is easy to see some of the answers. but there are some twists I did not see coming.

I was given this ebook to read by Net Galley and Kensington Books to read for free.  In return I agreed to give a honest review and be part of Thoreau in Phantom Bog book tour.

September 24 – View from the Birdhouse – Spotlight

AUTHOR QUESTION: Do you write every day? Do you have a word goal for each day you write?

Fun idea to have a person from the past as the hero.
Would love to try this series.
thanks.

I am unfamiliar with this series but will definitely check it out. It sounds like it is right up my alley.

What an interesting way to incorporate a historical figure into a cozy!

Each review I read leads me to want to read this even more - I do appreciate analytical mysteries! And historical...on my latest wish list!

Unfamiliar with this author I will have to check them out!!