Pane and Suffering by Cheryl Hollon 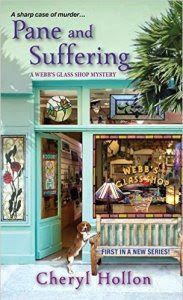 To solve her father’s murder and save the family-owned glass shop, Savannah Webb must shatter a killer’s carefully constructed façade. . .
After Savannah’s father dies unexpectedly of a heart attack, she drops everything to return home to St. Petersburg, Florida, to settle his affairs–including the fate of the beloved, family-owned glass shop. Savannah intends to hand over ownership to her father’s trusted assistant and fellow glass expert, Hugh Trevor, but soon discovers the master craftsman also dead of an apparent heart attack.
As if the coincidence of the two deaths wasn’t suspicious enough, Savannah discovers a note her father left for her in his shop, warning her that she is in danger. With the local police unconvinced, it’s up to Savannah to piece together the encoded clues left behind by her father. And when her father’s apprentice is accused of the murders, Savannah is more desperate than ever to crack the case before the killer seizes a window of opportunity to cut her out of the picture. . . 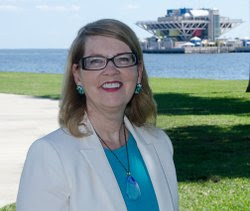 Cheryl Hollon now writes full-time after she left an engineering career of designing and building military flight simulators in amazing countries such as England, Wales, Australia, Singapore, Taiwan, and India. Fulfilling the dream of a lifetime, she combines her love of writing with a passion for creating glass art. In the small glass studio behind her house in St. Petersburg, Florida, Cheryl and her husband design, create, and produce fused glass, stained glass, and painted glass artworks. Visit her online at http://cherylhollon.com, on Facebook or on Twitter @CherylHollon.

My Review Pane and Suffering by Cheryl Hollon

A new cozy murder mystery.  It is full of twists that you don't see who or why the murder happened.  Interesting second characters,  Along with good characters.  It is also a clean read.

Savannah lives in Seattle but she has come back to Florida for her father's funeral.  Savannah works with blowing glass.  She is going to sale the shop to her father's helper Hugh.  But Hugh turns up dead in the stain glass shop.

Savannah does not believe that they both died within a week of a heart attack.  When she finds a note from her father saying if she found this he was murdered and she is in danger too.  The police officer who is working the case is not working. He is lazy and thinks they both died of heart attacks.

Savannah's father has left her clues too figure out who killed him.  He worked in codes during the cold war.  Savannah was taught the codes in her youth.

There are two different people interested in buying the shop.  She is wondering if they killed her father.

You get introduced to making glass as Savannah takes over teaching the glass her father had signed up to teach.

Edward from the pub next door keeps bringing Savannah different teas and breakfast items.  He owns a pub.  He has secrets too.

I would read another book by Cheryl Hollon in the future.  I stayed up late to finish reading this story because I needed to know who the murder is.

I was given this ebook from Net Galley and Kensington.  In return I agreed to give a honest review of Pane and Suffering by Cheryl Hollon

I love being introduced to another great book and author...thanks! Themes are important to me as I read many culinary, hobby, and unique location mysteries. When I was young, I took a stained glass class and made a nice project. It was fun!