A Cowboy for Christmas by Lacy Williams 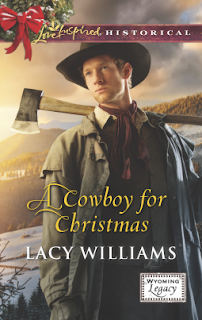 After an accident leaves her injured, Daisy Richards stays secluded at her family's Wyoming ranch to avoid the town's gawking stares. Yet handsome cowboy newcomer Ricky White insists she can do anything she dreams—ride a horse, decorate a Christmas tree…even steal a man's heart.

Once a reckless cad, Ricky is to blame for what happened to Daisy. Now reformed, he wants to make amends by setting things right for his boss's beautiful daughter in time for the holidays. But Daisy doesn't know Ricky's responsible for her predicament. When the truth is revealed, will he lose the greatest gift he's ever received—her trust?

My review: A Cowboy for Christmas by Lacy Williams

I was drawn right into the story. I love the characters, the drama, setting and action. It was also a clean read.
I wanted Daisy to prosper and gain confidence in what she could do. It is frustrating when your life changes in an instant what you can do. Daisy struggle was real. Before the accident she had two arms and now just one. She does not want to be seen by anyone else. Feels like they would stare at her.

Ricky White realized what he had caused with his fight in the street. He has repented and wants to make amends somehow. He works for the Richards ranch. He sees what Daisy is struggling against and makes way for her to cope. His simple changes make things possible for Daisy to do.

Daisy and Ricky are alone on the ranch one Sunday and Ricky gets her to help him in the barn deliver puppy. Then Daisy's whole family comes back the next day and are all sick. They have to take care of everything.

It deals with forgiveness and making amends. I thought it was a good story that got it's message across in a real way. The way Daisy felt was true.

The setting is Northeast Wyoming, early December 1900 on a ranch.

A Cowboy for Christmas is a Wyoming Legacy book #5 I believe. I have enjoyed all the books in this series that I have read. I will read more from Lacy Williams again in the future.

I was given this ebook to read by Net Galley and Harlequin. In return I agreed to give honest review of A Cowboy for Christmas.
Posted by rhonda1111 at 2:53 PM