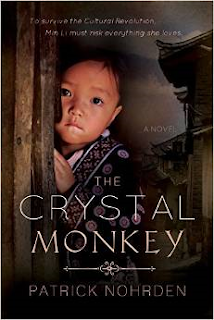 Little Min Li believes she lives in the world s greatest nation until the Red Guards terrorize her village. And when her father sells her crystal monkey to buy alcohol, Min Li loses much more than a beloved toy. As she grows up, Min Li must rediscover her hope and courage in order to achieve her greatest dreams. This true-life story will capture your heart!

Originally from Santa Cruz, California, Patrick Nohrden left high school early in order to join the Army. After serving in various assignments throughout the U.S. and Europe, he returned to America and to school, earning a B.A. in English with Great Distinction from San Jose State University where he won two Phelan Literary Awards. Later, he obtained his law degree from the University of Akron and practiced law in Las Vegas, Nevada. Growing disillusioned with the law, after twelve years he gave up his law practice and moved to Northeast China where he taught conversational English at Bohai University. There, he fell in love with the Chinese people and has been an avid scholar of Chinese culture and history ever since, focusing his attention on modern educational systems and the era known as the Cultural Revolution (1966-1976).

Returning to the United States, Patrick Nohrden obtained his teaching license and earned a Master of Arts degree in Teaching Secondary English from Sierra Nevada College and taught public school in Las Vegas for three years venturing overseas again. He taught British Literature and Speech in Kuwait for a year where he met his Chinese wife, Limin, his inspiration for the character Min Li in The Crystal Monkey. A year later they were married in China, and he spent the next two years teaching English Literature in a special Canadian Program in Zhengzhou and was named Teacher of the Year. Now living in Reno, Nevada, with Limin, Patrick Nohrden teaches English and publications for a local high school.

An expert in modern Chinese culture, Patrick Nohrden has published more than thirty articles on China, as well as numerous articles on the Middle East, Russia, and methods of teaching English.

My review: The Crystal Monkey by Patrick Nohrden

This is a fascinating story. I really have not read any books based on a little girl growing up in China. I did not want to put the story down. It was a good glimpse at what life was like.

It shows how hard and why students study so long and hard. What different festivals they celebrated. How the different uprising and changes made in political effected families. What happens if your family gets on the wrong side of the government and you became a black family.
How the teachers, doctors were taken and uneducated people than became the doctors and teachers.

Min Li is the main character in Crystal Monkey. She starts out very young. She is born in a peasant family with a older brother and two younger sisters. She becomes fascinated with a expensive crystal monkey in a little gift shop. The shop owner is retired and does not sell too much and he tells her if it does not sell he will leave it to her in his will.

There is only one book that they have to learn from in school and supposedly each house. That is a scary thought of no books.

The author is a American who lived in China for years teaching English and is married to a Limin who is Chinese and based his character on. His book in my eyes made sense of what life could have been like in China at that time.

Cultural Revolution (1966-1976). Is what he based his book on those years and what was life like during that time.

I did not want the story to be over. I wanted to know more about Min Li's future.

I was given this ebook from Cedar Fort Publishing so I could give a honest review of it and take place on The Crystal Monkey book tour.
Posted by rhonda1111 at 11:30 PM