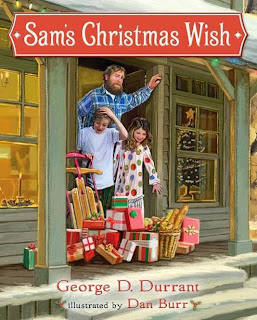 RELEASE DATE: September 30, 2014
We don't need no charity," insists Big Sam Edwards. It's bad enough to have lost his job a few weeks before Christmas; the thought of "do-gooders" meddling in his business is more than he can bear. "I'll be watching if anybody comes around trying to leave anything at the door!" he warns.

But the mystery of a pile of gifts left anonymously, without any tracks in the snow, works a change in Sam's heart. The spirit of Christmas fills his home with joy.

Over the years, Sam becomes one of the most generous men in town. Yet his fondest wish goes unrealized: "I wish I could do something good and do it in secret so nobody would ever know."

And then one Christmas, he gets his chance—his secret act is even more gratifying than he ever could have imagined.

About the Author:
George Durrant was born and raised in American Fork, Utah. He’s believed in Santa Claus as a child and as a parent. George is a master storyteller and loves telling stories to his eight children, thirty-four grandchildren, and fifteen great-grandchildren.

This is a powerful 29 pages. It made me smile, cry and think of many of my Christmas memories on both sides. Love the power of Giving in secret and receiving too.

One Christmas Sam had lost his job but he did not want any charity. He stayed up late to catch anyone who was going to give his family any gifts. Than he fell asleep. Christmas had come and left stuff inside his house. His kids were excited. Sam was mad he called the sheriff.

Sam finally felt the Christmas spirit. He gave the rest of his life but always wanted to do in secret and not get caught.

This story touched me. That even rethinking about the story brings the tears again.

I think this would be a good book for the family to read. I think we all need to learn to give in secret maybe not as great a gift as Sam gave but whatever we can. All the giving and receiving of gifts in secret sure spread the joy of Christmas. May we all have Sam's Christmas Wish all year long.

I have to say the illustrations by Dan Burry are beautiful. I would hang almost any of them on my walls.