Light The Stars (Cowboys of Cold Creek #1) by RaeAnne Thayne 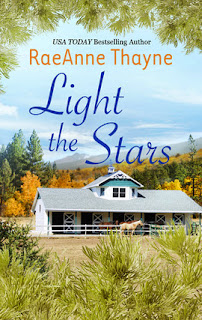 Wade Dalton was having a very bad day.

His five-year-old had accidentally set the kitchen on fire. His daughter was surly, as usual. The baby hadn't been fed yet. And his mother--aka "The Childminder"--had eloped...with a scam artist. Could it get any worse?

Turned out it could. Because the annoyingly beautiful daughter of said scam artist was now at the door, batting her doe eyes at him and proposing that she be his temporary nanny while awaiting the newlyweds' return. Could he trust her to be under his roof? Could he trust "himself" with her under his roof?
File Size: 420 KB
Print Length: 256 pages
Publisher: Harlequin Special Releases (March 15, 2013)
(first published April 1st 2006)

My review:Light The Stars (Cowboys of Cold Creek #1) by RaeAnne Thayne

I like how you can find older stories in a series now in ebook. I just wish there was a way to tell if book is an older one. I knew this was off by the first book in a long series. Goodreads also had date first published. I know most is not the author's fault.

I like reading RaeAnne Thayne's books I have only been reading her works the past couple of years. Light the Star is her first book in Cowboys of Cold Creek series. It has charming little kids, lots of family life. I like the characters and would like to read more in the future about them. Some drama, some romance and a story I did not want to put down. I wanted more. It is also a clean read.

Wade Dalton is a widower with three kids and running a ranch. His mom has been watching his kids for the past two years but she ran off in the night to elope. He never knew she was dating. This is his birthday and a busy week on the ranch.
Wade has a daughter Nat in elementary school and two boys too young to go. Cody is two. He has two brothers.

Caroline Montgomery is a life coach. She travels all night to try and stop her father con artist from marring one of her clients. While at the door to ranch talking to Wade she smells smoke. Tanner a preschooler has started a kitchen fire. Tanner is a handful to raise. Caroline offers to stay and tend the baby while Wade takes Tanner to the clinic.

I really enjoyed watching life on the ranch. Wade is a hard worker and hardly spends time with his children. Which a lot of single parents that have to work do. I was lucky in that I was home raising my two.