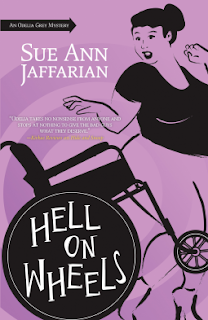 It's GAME ON for popular plus-sized sleuth Odelia Grey

When Odelia Grey and her husband, Greg, attend a rugby match to cheer for their quadriplegic friends, the last thing they expect is to witness a murder on the playing court. Complicating matters is their friendship with the killer—and with the second person who turns up dead. It doesn't help that Odelia's pompous boss, Mike Steele, is embroiled in a mystery of his own—one that leaves more than his super-sized ego bruised and battered.

Odelia enlists the help of family and friends, and gets some surprising assistance coming out of left field. But with a murderer calling the shots, Odelia wonders if she can tackle this dangerous case or if she's out of her league.
File Size: 2166 KB
Print Length: 312 pages
Publisher: MIDNIGHT INK (November 1, 2014)

My review: Hell on Wheels by Sue Ann Jaffarian (An Odelia Grey Mystery #9)

This is the ninth book in the series and only the second one I have read but I did enjoy it. Would love sometime to read the whole series. I like the characters. The mystery is good till the end. Easy to follow the lives of the characters even when I have not met them before. Lots of drama, some action. A clean entertaining read.

Odella Grey is the main character. She works for a lawyer Steel. She is middle age and heavy. Her husband is in a wheel chair.

Greg is a businessman. He plays wheel chair basketball but he can't play rugby because he is too physical for it.

I had never heard of rugby before and would like to see a game played sometime.

They are at a rugby match out of town and rooting for their friends. When they witness a murder in front of them. They know the deceased, the accused who started to beat up on the court.

I thought it was funny that everyone of their friends wants in on their case that they assume they will be nosing around in. Even Odella's mother. Their friends even a cop in a nearby city. Even her boss Steel who has his own drama going on wants to be involve ed.
The characters are all different than you expect. From detectives, lawyers, businessman, hookers, quadriplegic rugby players, hired killers. You never know who will show up in the story.

I hated every time I had to put the book down to answer the phone or door I just wanted to find out what happened next. I guessed wrong on who the killer was and why.

I was given this ebook to read by Net Galley and Midnight Ink. In return I agreed to give honest review of Hell on Wheels.

The setting for this book is in California around orange county area.

I want to read more about Odelia & her friends and co-workers in the future.