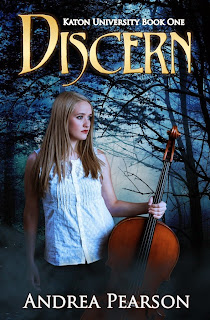 Nicole Williams is an Arete—a fourth child with magical abilities—yet no matter how hard she tries, she can’t Channel her power. In fact, she seems to be the only student at Katon University who fails at magic.

That doesn’t stop magic from finding her. It starts with possessed books and cursed spiders before moving quickly to freaky shadows and magical currents. Nicole turns to her best friend for help, along with fellow student Austin Young, who is considered by all a magical rarity. He also happens to be the hottest guy on campus and just might be interested in her.

Nicole soon finds herself competing to be included on a university-led expedition to Arches National Park. She is determined to show everyone, but mostly herself, that she does belong. Yet, to qualify for the trip, she must produce at least a speck of Wind magic, and that appears to be impossible.

As the competition progresses, Nicole wonders if she’s making the right choice—especially when she learns that the strange fossils they’ll be studying in Arches might not be as dead as everyone thinks.
File Size: 3663 KB
Print Length: 294 pages
Page Numbers Source ISBN: 1500913499
Simultaneous Device Usage: Unlimited
Sold by: Amazon Digital Services, Inc.
Language: English
ASIN: B00N1NZIKA


My review: Discern by Andrea Pearson (YA Paranormal/Soft Horror)

I can see why this book is called a soft horror. If you really are scared of spiders you might freak at one scene. I don't like them but did not like thinking of the one scene. There is a body count. So I would not recommend this book to young children who you did not want your kids to see Harry Potter book 7.

This is my first book of Andrea Pearson's that I have read but it won't be the last. Can't wait till the next full book comes out
in Katon University.

I did not the book down. It was interesting and I wanted answers to all the puzzles about Nicole.

Nicole Williams is the central figure. She is just starting college. She is a fourth child which makes her have magic and called Arete. Nicole got her power late and still has not figured out how to use it. Katon University is one of three Arete University in the states.
Nicole also has problems with her parents. She is talented and smart.

Nicole has so much drama happening around her. Spiders are getting into her room and no matter what they do seems to get worse each night. A book follows her around. Austin the most powerful freshman seems to ignore her, like her and stares at her.

There is lots of violence the last part of the book. But not the kind you might be used too.

I like the characters, want more of them. It would make a great movie too.

I was given this ebook to read and in return I agreed to give honest review of Discern.
Posted by rhonda1111 at 2:38 PM