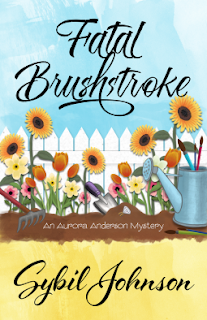 THE FIRST IN A NEW SERIES

Computer programmer and tole-painting enthusiast Aurora (Rory) Anderson doesn’t envision finding either when she steps outside to investigate the frenzied yipping coming from her own backyard. After all, she lives in Vista Beach, a quiet California beach community where violent crime is rare and murder even rarer.

Suspicion falls on Rory when the body buried in her flowerbed turns out to be someone she knows—her tole painting teacher, Hester Bouquet. Just two weekends before, Rory attended one of Hester’s weekend painting seminars, an unpleasant experience she vowed never to repeat. As evidence piles up against Rory, she embarks on a quest to identify the killer and clear her name. Can Rory unearth the truth before she encounters her own brush with death?

Sybil Johnson’s love affair with reading began in kindergarten with “The Three Little Pigs.” Visits to the library introduced her to Encyclopedia Brown, Mrs. Piggle-Wiggle and a host of other characters. Fast forward to college where she continued reading while studying Computer Science. After a rewarding career in the computer industry, Sybil decided to try her hand at writing mysteries. Her short fiction has appeared in Mysterical-E and Spinetingler Magazine, among others. Originally from the Pacific Northwest, she now lives in Southern California where she enjoys tole painting, studying ancient languages and spending time with friends and family.

I was surprised that this was book #1 in the series. The characters have detailed background and show the history. I like Aurora and her friend Liz. I did guess the murder early on and what the murder weapon was, but not all the motive and why frame Aurora.

Aurora does not tell the police everything she knows or the full truth right away because she does not trust the police with good reason. The Chief of Police can only see her as the guilty party because of who her parents were.

Why do people blame the innocent children for things that the parents do even before they were born?

Rory finds a body buried in her yard and does the right thing and calls the police. It was her teacher on tole painting that she had taken a lesson from her a couple of weeks ago.

Rory's adopted mom owns a craft store. This is centered around tole painting. Which takes a lot of time to do.

Rory works on computers from home. She also helps her mom out in her store. She is single just broke up with boyfriend. Her good friend Liz sells homes.

Detective Green is pretty new to town. He is looking at Aurora as one main suspect but he is also doing his job. He is good looking. He is very serious.

The setting is Vista Beach, CA it is a mile wide and two miles long on the coast.

I would read more books by Sybil Johnson in the future.

I was given this ebook to read by Net Galley and Henery Press. In return I agreed to give honest review of Fatal Brushstroke.