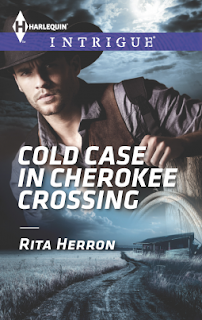 A lot of men on death row profess their innocence. Those men are mostly just scared of dying. Jaxon Ward understands that, but as a Texas Ranger he needs to uphold the law. Yet the story Avery Tierney tells him… He's convinced her brother is awaiting execution while the real killer remains at large.

Searching for the murderer opens old wounds for Avery, and now she has to face a past so traumatic she blocked it out. A past not so dissimilar to Jax's. Before long, the only comfort they find is in each other's arms. Avery's lost everything once before. And now, if she loses Jaxon, she fears she'll never recover.
Series: Harlequin LP Intrigue (Book 1535)

Cold Case in Cherokee Crossing deals with some tough issues. Like, sex abuse to minors, physical abuse, verbal abuse, problems in foster care, drug abuse, death row. Is is full of drama, mystery danger and a countdown to death.

Avery Tierney has kept quiet about what happened to her when she was 9 years old. She was repeatedly abused by her foster father. Her big brother tried to protect her. She is the daughter of a murder. Her brother killed her foster father in front of her, but most of night is blocked out.

Avery goes to visit her brother for the first time a week before he is to die on death row. Avery finds out he confessed because he thought she committed the murder. Avery is going to try and save him.

Jaxon Ward is a Texas ranger. He is supposed to make sure nothing goes wrong with the case.

Avery and Jaxon meet in the prison and the more Jaxon learns the more he thinks things look fishy. So he starts to investigate because he also believes Hanks story.

Hank at 14 kept trying to save his sister from rape. He kept getting beat up and tied up for it.
He picked up a knife and stabbed and stabbed his foster father and showed no remorse for it.

Someone wants Avery to let the case go and threatens her if she keeps asking questions. Avery won't stop. She feels guilty because she testified against her brother. She never told anyone about the abuse except therapist. She feels she should have kept in touch with her brother before this time.

Jaxon risks a lot to find out the truth and be able to prove it before Hank runs out of time.
Good story keeps you into the story. See what one evil man can do to ruin lots of kids lives.

The setting is Texas small town.

I was given this ebook to read from Net galley and Harlequin. In return I agreed to give honest opinion.