A Secret Colton Baby by Karen Whiddon (The Coltons: Return to Wyoming) 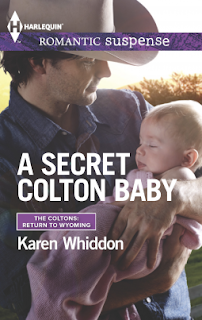 
A new addition to Wyoming's most scandalous family

Is Theo Colton the father of a baby dropped at his doorstep by a dying socialite? Even more shocked than the sexy bronc-riding champ is his beautiful cook, Ellie Parker. Just as she becomes the baby's nanny, she discovers a terrifying stalker has followed her to Dead River.

What's worse—as a mysterious virus quarantines the town, danger goes viral, too. But to Theo and Ellie, the biggest dangers are their sizzling attraction and profound new feelings. Can Ellie tame the cowboy who wants nothing more than a wild ride with women? Or must she deny her heart to save his life?
Print Length: 288 pages
Publisher: Harlequin Romantic Suspense (October 1, 2014)
Sold by: Amazon Digital Services, Inc.

My review: A Secret Colton Baby by Karen Whiddon

Wow there is a lot of story lines in this book. Drama, action, romance and lots of suspense and terror. I really like Ellie Parker. She is caring, hard worker, scared and worried about those around her.

Ellie Parker has fled her home because of a stalker. She has hired on as a live in cook on a ranch. When a baby was dropped off saying Theo was the father she agreed to help with the baby too.

Theo Colton was a rodeo rider who had a bad fall last year. He was told he could never ride a horse again. He was care free. He is not ready to be a father. He is a rancher who is not needed.

Amelia mom Mimi got sick and brought her to Theo her father than died. Amelia is cute not very old.

Mimi Rand divorced her husband Dr. Rand and than chased after Theo. Had his baby and when she got sick brought Amelia to him. She is ground zero. They need to find out where she pick up the virus.

Flint Colton is the sheriff. He is the oldest of the three Colton's. He came back to his hometown when his brother was fighting to live after the accident.

Gemma Colton is a nurse at the clinic it is not a good thing. They have tried to find out what the virus is. She is super busy. Watching the town get sick.


Theo found out he was a father than the mother died. She was the first person to die but not the last. The town of Dead River, Wyoming is under quarantine till they find out about the virus and stop it. People are panicking. There is Ellie's stalker who followed her into town. Plus a couple of different crimes committed. The sheriff has his hands full.

This is one of those series where different writers write one story than the next part of the story is written by a different writer. It leaves you wanting to know the answers about the virus. Do they catch the bad guys.

There is a couple of love scenes. Not a focus of the story. I enjoyed the story but wish I had all of the series right now.

I was given this ebook to read and in return agreed to write a honest review of the book. Received it from Net Galley and Harlequin.