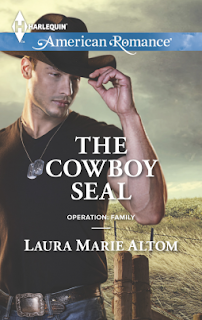 Description
The Road To Redemption

Navy SEAL Cooper Hansen hasn't been home in more than a decade. He has never forgiven himself for the accident that killed his mother, and as far as he knows, neither has his family. But when his brother's widow, Millie, needs his help to save the Hansen ranch, Cooper can't stay away any longer.

Millie has always loved Cooper in some way—as a childhood friend, a high-school crush and then as a brother-in-law. Now that he's back in Brewer's Falls, she's discovering new, unexpected feelings for him. But if Cooper keeps holding on to the pain of the past, will he ever give their future together a fighting chance?
Series: Harlequin American Romance\Operation: Family (Book 1517)

My review: The Cowboy Seal by Laura Marie Altom

is emotional, dramatic and sexy. Cooper Hansen has not been back home since he joined and became a Navy Seal. Now he is needed at the ranch. His father kicked him off and called him a murder of his mother.

Cooper has to learn to forgive himself for the accident that killed his mother. He is single. He never even came open for his brothers funeral.

Millie is a widow with two kids. Her father-in-law had a stroke and still have lots of health issues. She is trying to take care of ranch, her children and her father-in-law. Last thing she wants is to find herself attracted to her brother-in-law.

J.J is a cute little boy. My favorite character

LeeAnn is almost 12 and way too young to be thinking of boys that much.

I love how they all become close and deal with forgiveness and become a family. I can relate to these characters in different ways.

I was given this ebook to read from Net Galley and Harlequin. In return I agreed to give honest review in exchange.