This Hero for Hire by Cynthia Thomason 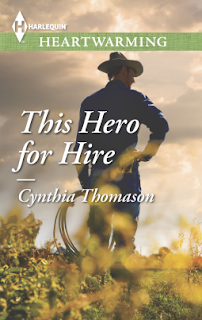 Description
He's more than her protector…

Being a cop in a small Georgia town is a pretty peaceful job, and one that Boone Braddock takes pride in. Babysitting the governor's daughter, however, isn't Boone's idea of police duty. Especially when it's Susannah Rhodes, who has an impulsive streak a mile wide.

Boone was Susannah's crush in high school. He's still unmistakably handsome. Worse yet, it's impossible to keep anything from him—like the real reason she's returned home. And it's more impossible still to keep her distance. Because a long time ago, the two had shared something special. Something that was never finished….
File Size: 355 KB
Print Length: 171 pages
Publisher: Harlequin Heartwarming (October 1, 2014)
Sold by: Amazon Digital Services, Inc.
Language: English
ASIN: B00JZFL47O

My review: This Hero for Hire by Cynthia Thomason

This Hero for Hire was good. The topic of organic farming and election are perfect topics right now. This keeps your attention and interest in the story. Has some twists that you don't see coming to soon. It is a clean read. Shorter story but good.

Boone makes a good hero. He is a cop. He does not want to bodyguard the Governor's daughter but can't turn him down. He tries to be fair and a compromise instead of just forcing his decision on everybody.

Susannah Rhodes does get into trouble a lot. She has come home to help her father win another term as Governor. She also has a second part that she wants to keep from her father till after the election. She is not home an hour when she gets into trouble the first time. She cares about animals, and organic gardening.

Governor Rhodes is glad that his daughter wants to come home to help him win. He knows that trouble follows her. He plans on leaving on three week around the state. He decides when his daughter does not want full security at least to have cop keeping her safe and stay with her for three months.

Susannah at 15 had a crush on senior footballer Boone and kissed him that left him stunned.

I liked the book. I wish my garden was as well as Susannah's.

I was given this ebook to read and in return agreed to give honest review of it.