Lost Under a Ladder by Linda O. Johnston (A Superstition Mystery) Giveaway & review 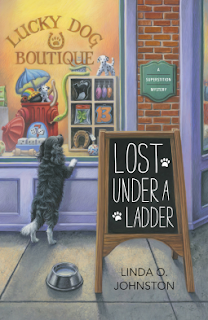 Are superstitions real? Rory Chasen doesn't think so—until her beloved fiancé walks under a ladder and is killed by a car five minutes later. Needing closure, Rory takes her dog Pluckie to a town called Destiny, where superstitions are a way of life.

Rory's visit to Destiny takes an unexpected turn when Pluckie saves the life of Martha, the owner of the Lucky Dog Boutique. To show her gratitude, Martha offers Rory a job at the pet store. But when Martha becomes the prime suspect in the murder of the local bookshop owner, Rory refuses to believe that she would do it. Rory is convinced the real killer still roams Destiny's streets, and she must uncover the truth before Martha is hauled off to jail.
Series: A Superstition Mystery (Book 1) 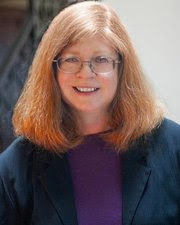 Linda O. Johnston’s first published fiction appeared in Ellery Queen’s Mystery Magazine and won the Robert L. Fish Memorial Award for Best First Mystery Short Story of the year. Since then, Linda, a former lawyer who is now a full-time writer, has published more short stories, novellas, and 37 romance and mystery novels, including the Pet Rescue Mystery Series, a spinoff from her Kendra Ballantyne, Pet-Sitter mysteries for Berkley Prime Crime, plus Harlequin Romantic Suspense as well as the Alpha Force paranormal romance miniseries for Harlequin Nocturne.

My review: Lost Under a Ladder by Linda O. Johnston (A Superstition Mystery)

I like Rory Chasen. She has come to destiny to find out if the superstition of walking under a ladder really works. Her fiancé died after walking under a ladder. She brings her dog Pluckie with her. She walks into the pet shop Lucky Dog Boutique. No one is in sight. Pluckie draws her to back of store and wanted in the back room. Rory went in and found a older woman Martha on the floor unconscious. She calls 911.

Rory at home is a assistant manager of large pet store. Martha asks her to help manage her store while she is laid up. So Rory says yes.

Justin Halbertson Police Chief of Destiny is good friend of Martha. He takes Rory out to dinner and helps convince her to help Martha.

When Rory and Pluckie are walking to work Pluckie wants to go into the book store. She finds one of the owners dead in back room dead with broken mirror on floor. The name of the book store Broken Mirror Bookstore.

Martha a older lady who owns the Lucky Dog. She has a nephew who works as a tour guide. She lives above her store. She becomes a suspect for killing the owner of Broken Mirror.

This is a cozy mystery. With lots of drama, good suspense, some action, and lots of superstitions. I was kept guessing back and forth to different suspects.

I have been known to knock on wood, picking up a lucky penny and a few others. What Superstitions do you believe? I can see how this could be a fun series with different superstition for each book. I did not know black and white dogs are lucky. A lucky rabbit foot always doesn't seem to be lucky for the rabbit.

I was given this ebook from Net Galley and Midnight Ink. In return I agreed to give honest review of Lost Under a Ladder.

I believe that superstition says that I win if I am posting during a post season baseball game!!

I'd like to win this book---maybe I'll find that some of my superstitions are shared by others.