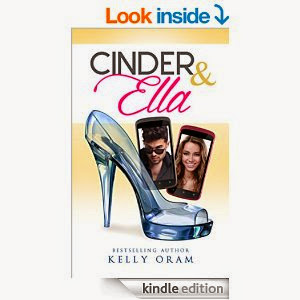 rIt’s been almost a year since eighteen-year-old Ella Rodriguez was in a car accident that left her crippled, scarred, and without a mother. After a very difficult recovery, she’s been uprooted across the country and forced into the custody of a father that abandoned her when she was a young child. If Ella wants to escape her father’s home and her awful new stepfamily, she must convince her doctors that she’s capable, both physically and emotionally, of living on her own. The problem is, she’s not ready yet. The only way she can think of to start healing is by reconnecting with the one person left in the world who’s ever meant anything to her—her anonymous Internet best friend, Cinder.
…
Hollywood sensation Brian Oliver has a reputation for being trouble. There’s major buzz around his performance in his upcoming film The Druid Prince, but his management team says he won’t make the transition from teen heartthrob to serious A-list actor unless he can prove he’s left his wild days behind and become a mature adult. In order to douse the flames on Brian’s bad-boy reputation, his management stages a fake engagement for him to his co-star Kaylee. Brian isn’t thrilled with the arrangement—or his fake fiancée—but decides he’ll suffer through it if it means he’ll get an Oscar nomination. Then a surprise email from an old Internet friend changes everything.(
File Size: 993 KB
Print Length: 275 pages
Publisher: Bluefields (October 1, 2014)
Sold by: Amazon Digital Services, Inc.
Language: English
ASIN: B00MRLYO7K

My review:Cinder & Ella by Kelly Oram

Tissues needed! Boy did I feel lots of emotions reading this book. I loved it. Cinder & Ella is a way different twist on Cinderella. Loved the ending! Though I would of have read more of their story.
Ella goes through so much. Oh you keep hoping things will get better for her. She is tough fighter. I loved her character. She was raised by her mother since she was 12 years old.
Her best friend is someone she has never met before Cinder. She has known him from her blog.

Brian or Cinder has lots going for him. He is a actor, good looking, staring in his favorite book series movies. His best friend is Ella but she does not know he is an actor. He is fake engaged to his co-star for publicity.

This book I did not put down unless it was to reach for more tissue until I had to. It is full of drama, relationships, hardships, romance , mean girls and bullies and facing life struggles. It is a clean read. It is a book you want to talk about it.

Ella has moved from Boston to Hollywood to Live with her father & his new family. She meets them for the first time when she moves in. She has two step-sisters a year younger beautiful spoiled princess. She is made to go to a private school her senior year to do over.
Ella struggles just to walk and now she faces struggles with scars all over her body and mind.

The book is told from two perspectives mostly Ella's but also Cinder's story. I was totally rooting for them to meet. How they did was perfect. The ending I wanted to shout and cheer for Ella too.

This is the first book that I believe I have read by Kelly Oram but I want to read more books from her in the future. Though I don't want to shed so many tears both good and sad ones.

The target I would say for this book is a fan of Cinderella and YA, romance readers.

I was given this ebook to read from ebooks for review so I could honestly give Cinder & Ella a review.
Posted by rhonda1111 at 5:56 PM