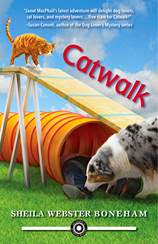 Animal photographer Janet MacPhail is training for her cat Leo’s first feline agility trial when she gets a frantic call about a "cat-napping." Janet and her Australian Shepherd Jay set out to track down the missing kitty, and quickly find themselves drawn into the volatile politics of feral cat colonies, endangered wetlands, and a belligerent land developer. Janet is crazy busy trying to keep up with her mom’s nursing-home romance, her own relationship with Tom, and upcoming agility trials with Jay and Leo. But when a body is discovered on the canine competition course, it stops the participants dead in their tracks—and sets Janet on the trail of a killer.

Drop Dead on Recall, the first in the series, won the Dog Writers Association of America Maxwell Award for Best Fiction Book. She is also the author of 17 nonfiction books, six of which have won major awards from the Dog Writers Association of America and the Cat Writers Association. For the past two decades Boneham has been showing her Australian Shepherds and Labrador Retrievers in various canine sports. She has also bred top-winning Aussies, and founded rescue groups for Aussies and Labs. Boneham holds a doctorate in folklore from Indiana University and resides in Wilmington, N.C.


My review: Catwalk (An Animals in Focus Mystery) by Sheila Webster Boneham

Watch out this book has lots of cute baby animals you might want to bring one home too. I love the cover. I did not realize that cats can do agility courses too. The suspense is good I did not know who the guilty party was till the unveiling. Lots of suspects that did not like the victim. The characters are interesting and keep your attention on them.
Lots of cute animal characters too.

Janet MacPhail is a animal photographer. She has one dog Jay a Australian Shepherd he is a tracking dog. Janet dates Tom.
She also has a cat Leo who is just starting to train for agility courses too.

They go to a lot of dog training classes and shows. Makes me think I need to get animals better trained or me trained.

Janet's friend Alberta has been harassed because she is feeding wild cats and trapping and fixing them and releasing them in woods across from her house. Some people want to develop the wetlands. She calls Janet when she is afraid that someone has kidnapped her cat. She wants Jay to track her cat.

There is a lot of vandalism, murder, and abuse. Lots of drama in Janet's personal life with her mother. Plus Janet's relationship to Tom. There are a lot of animal lovers and haters out their.

The pacing is pretty good. I was not board. I was involved with the characters lives and there drama. It is also a clean read.

I have only read two of the three books of the series but would like to go back and read the one I missed.

There is a lot to like about Catwalk by Sheila Webster Boneham: the love of the pet owners for their furry family members, the care of many in the community for the feral cat population, and the budding romance between Janet’s mother and an elderly gentleman, to name but a few.
~Back Porchervations


I’m not sure who I like more, Janet or her wonderful animals. Janet is a very realistic character, easy to identify with. Boneham’s writing style is very smooth. The story just flows, keeping the reader engaged until the very end.
~Booklady’s Booknotes

I found Catwalk to be an enjoyable read. I’m an animal lover and I LOVE that Janet, her boyfriend Tom, and her friends are all animal lovers as well.
~Read Your Writes

October 5 – Chloe Gets A Clue – Interview

October 12 – Cozy Up With Kathy – Interview

So many good books and so little time.

a new series I need to read!!!