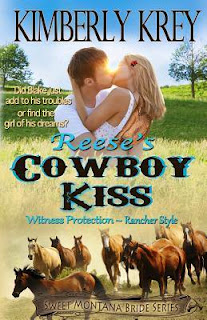 Content: I consider this to be “steamy clean”. There is some mild language, lots of kissing and a quickly fade to black closed door sex between a married couple.

Texan pageant winner, Reese Taylor, has a former classmate who wants her dead. Now she must leave her friends and family to enter a protection program on Emerson Ranch. A group of good-looking cowboys awaits her, but Reese has her eye on Blake Emerson, the one man too busy with the ranch to give her a chance. Blake Emerson has no time to go lookin’ for love. He’s got a ranch to run, positions to fill, and an ache in his heart from love gone wrong. So when he agrees to harbor a witness to help on the ranch, Blake assumes his first two problems are solved. But he never dreamed his new guest would be a woman. One he was destined to lose his heart to. With sparks burning hot and danger around the bend, one question lingers in his mind: Has he only added to his list of troubles, or has Blake just found the woman of his dreams?

I liked Reese. She was coping with a tough change really well. I liked the other characters too.
The weak part of the story for me was weird guy at the beginning of the story. Reese witnessed a murder. She was sent from Texas to Montana to work on a ranch.

Blake was in charge of the ranch hands. He was surprised that the new hand that needed to hide out was a lady. He wondered what to do with her. He could not stop looking at her.

I thought it would be better if she did some other work than cooking a few nights a week personally.

The ranch hands really liked Reese and were willing to do things to get her attention. They were surprised to see her.

The romance of the book was good. Some long kisses and attraction to each other. I really liked the scenes of Reese and Blake opening up to each other.

Had some good humor, some action scenes and was romantic.

This was the first book in the series but the last one that was written. I have not read the other books but would like to. I would think it hard to write a series backwards.

I was given this ebook to read so I could honestly review it.
Posted by rhonda1111 at 10:03 PM