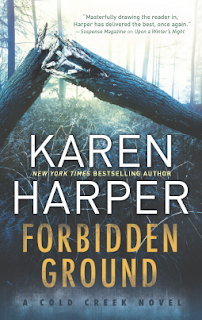 Despite a traumatic childhood in Cold Creek, Ohio, the Lockwood sisters have reunited there for the wedding of youngest sister Tess to the town's sheriff. Maid of honor Kate Lockwood is determined to break through best man Grant Mason's defences. An anthropologist, Kate makes her living studying the dead. She is particularly interested in the prehistoric Adena civilization that once called the area home. A large burial mound sits on Mason family land, and Kate wants permission to excavate. But Grant refuses and tells Kate to stay away from the mound.

Kate respects Grant's desire to honor his grandfather's belief that the dead should not be disturbed. However, the more she researches the more it becomes clear that Grant is hiding something. When one of Grant's friends is killed—and the sheriff is away on his honeymoon—the couple joins forces to assist the deputy in the investigation.

When Kate comes under attack she is certain it is connected to the burial mound. Grant seems concerned for Kate's safety, but despite their explosive attraction she can't help but be suspicious of his motives. Can Kate trust the man she's come to love, or will the wrong decision be her final act?
Series: Cold Creek (Book 2)
Mass Market Paperback: 352 pages
Publisher: Harlequin MIRA (October 28, 2014)
Language: English
ISBN-10: 077831670X
ISBN-13: 978-0778316701

I liked the suspense of Forbidden Ground. It had me guessing all over the place. I like the information about the mounds of Adena. I have not heard of them before. It would be interesting to learn about them. I like Kate and Grant characters. I like that it was a pretty clean story.
Did have some violence, romance, history, cult, and changes in paper mills.

Their was one line in the story that I did not like about Mormons when talking about cults group. I don't think it influenced my opinion but could have.

Grant and three of his childhood friends have a secret they swore to never tell or show anyone. They never even told their good friend Cabee because his dad was the sheriff and now he is one.

Kate has come back to town for her sister's wedding. She also hopes to get permission from Grant to excavate his mound in his yard. It had never been opened.

Also never realized that some trees are worth so much money. For $70,000 I would be tempted to sale a tree. Someone is targeting trees going on private property cutting them down and selling them. Grant's tree was special to him. Bird eye Maple.

Forbidden Ground was a complicated and interesting novel. I want to read the next book in the series.

The setting was a small town in Ohio up in the mountains.

I was given this ebook to read from Net Galley and Harlquin. I promised to write a honest review with my opinions.