Bianca Marshal is holding out for the perfect husband. Finding a man that meets the requirements of her must-have list in the foothills of the Appalachian Mountains has proven impossible. Bianca s mama insists that there s no such thing as a perfect true love, and that Bianca s ideal man is pure fiction. On the eve of her twenty-fifth birthday, Bianca discovers a devastating statistic: her chance of marrying is now only eighteen percent. Unwilling to accept spinsterhood, Bianca enters an essay contest that propels her into a whirlwind search for her soul mate. Via the opulence of London and the mysteries of the Holy Land, Bianca's true love will be revealed, but not without a heavy price.
Paperback: 400 pages
Publisher: Worthy Publishing (October 14, 2014)
Language: English
ISBN-10: 161795375X
ISBN-13: 978-1617953750

My review: The Covered Deep by Brandy Vallance

I liked reading The Covered Deep. Some of the characters endings I really liked and some characters ending I did not like. This is a clean read, a mystery adventure, romance, Christian fiction all rolled together to make a grand adventure.

The plot starts out by a contest by a rich British gentleman. The winners will get a trip to England and travel to the Holy Land.
Bianca Marshal age 25 is single, and choosy about it. Bianca dreams of meeting her soul mate. She is close to her father and he shows her the contest and gets her to enter it.

The setting for the book starts in Southern Ohio 1877. Then travels to London than onto the Holy Land.

Bianca meets the other contestant winners and she is intrigued with the historian. Things are started to hint that there is more going on then a group of strangers winning the contest and going on a trip.

Paul Emerson is a historian who won the riddle part of the contest. Bianca is very drawn to Paul from the start. Paul is also drawn to Bianca.

It also deals with repentance and forgiveness of sins. How much do you really believe on Christ being the Savior of the World? Do you believe and forgive yourself. The characters are tested on what they really believe.

I really enjoyed the descriptions of the Holy Land. You can see and feel the place how special and historic it is to so many people.

I would be willing to read another book by Brandy Vallance in the future.

I was given this ebook to read by Worthy Publishing for the purpose of reviewing The Covered Deep and being part of it's blog tour. 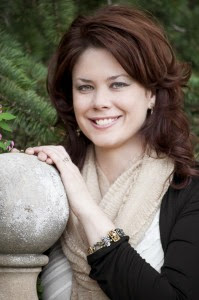 Brandy Vallance is a graduate of Jerry B. Jenkins Christian Writers Guild Apprenticeship. She has attended many CBA and ABA writing conferences across the country. Brandy has had fifty articles published in various magazines and newspapers and was on staff with a magazine focusing on the Victorian time period. During this time, Brandy traveled to Victorian balls and tea events, learning the ins and outs of Victorian etiquette and customs. Brandy has had Victorian fiction and non-fiction articles published.

Brandy is a member of the Christian Writers Guild, American Christian Fiction Writers, and Pikes Peak Writers. She is the 2013 winner of the Christian Writers Guild Operation First Novel Contest which included a publishing contract for The Covered Deep by Worthy Publishing. In 2012, she won the American Christian Fiction Writers Genesis Contest for historical romance. In 2011, Brandy was a semi-finalist in the Genesis Contest. In 2009, Brandy won honorable mention at the Pikes Peak Writers American Icon contest.

Brandy has taught writing workshops covering The Business Side of Writing, The Novelist’s Life, Discovering the Depths of Your Creativity, and Unlocking Personification & Metaphor to Deepen Emotion. Brandy has been the main speaker at ladies retreats and was able to direct, design the set, and act in a play that she wrote. In June of 2011, Brandy took a research trip to England, Scotland, and Wales and fulfilled a lifelong dream, adding depth and reality to The Covered Deep as well as nourishing future novel ideas.