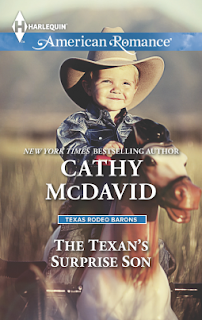 Jacob Baron is shocked to discover he's a father. But he's determined to do right by his son, despite the lack of strong role models in his own life. Jacob's a bull rider, and there's no halfway with him. He'll be the kind of dad his son needs…even if Cody's attractive aunt, Mariana Snow, seems to question his daddy skills at every turn.

Jacob cooks, cleans and has a nice touch with a two-year-old. He also has broad shoulders, gorgeous eyes and a mouth that can only be described as sexy. But Mariana's own part-time, no-good father was a rodeo star. She knows their charms can't be trusted. She's hanging around for Cody's sake, that's all. At least, that's what she keeps telling herself….
Series: Harlequin American Romance\Texas Rodeo B (Book 1518)
Mass Market Paperback: 224 pages
Publisher: Harlequin (October 7, 2014)
Language: English
ISBN-10: 0373755392

I love the cover of this book. Jacob Baron finds out that he has a two year old son. He does not want to be a father right now is his first reaction. Then he thinks about it and jumps right into learning how to be a father.

Jacob is a hard worker. He works full time and rodeo's on the weekend. His father gets proud of his wins. If he can make it to the champion rodeo he will have the job he has been fighting for years. Jacob does not feel close to his adoptive family.

Mariana Snow loves her nephew. She makes a hard choice to let the father know he has a two year old son. That he can be part of his life if he wants to. Her sister got pregnant on purpose. But her cancer has come back and taken her life. Mariana is a lawyer.

Cody is a cute two year old. After his mom died he has lived with his Aunt Mariana. He wants a father till he meets him. he loves animals.

The Texan's Surprise Son is full of emotions, laughs, learning to be a parent, rodeo. Each of the Texas Rodeo Barons have the same family, the rodeo, a mystery of where Brock's first wife disappeared, dealing with sudden parenthood and love scene.

Get some more answers about where their mother is and what name she is going by now.

I enjoyed reading Cathy McDavid's Texas Rodeo Barons series. I definitely want to read the last of the series.

I was given this ebook to read and in return agreed to give honest review of it. Received the book from Net Galley and Harlequin.
Posted by rhonda1111 at 12:38 PM