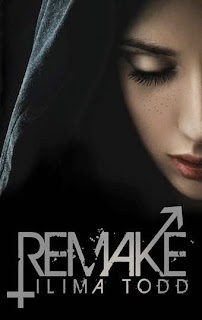 There were twenty members of my batch. We were raised androgynously until our seventeenth birthday. That was the day of our Remake. The day I found what the Prime Maker had been hiding from us all along. The day I discovered who I was and, eventually, who I really wanted to be. The day I learned the truth. The day that started me on the path to change everything.

My review: Remake by ILIMA TODD

I was unsure about reading this book if it would be one that I would love. It was. Do I totally agree with the ending? No, I would have a few more chapters but if I say what I would want to know more of it would be giving away too much. I did like how it ended, the choices Nine makes.

I really like Nine and Theron's characters. I do admit they made me shed a few tears along the way. I cared about them and wanted things to workout for them. There are a lot of other characters that I liked along the way that we meet.

Remake makes you think what would you want to change on yourself. Nine is really having a hard choice with a few of her choices she needs to hurry and decide the biggest one is male or female. What does she want to be when she gets remaked. What name would she want to be called.

Batchers are all raised alike. ten females and ten males in batches. They don't have to deal with hormones till they get remaked. All or shaven bald, dressed alike and live, eat and learn together.

The story draws you into Nines life as she tries to decide what she wants to become. One of her planned things she and Theron want to share apartment together forever. Lots of drama, choices and love.

The setting of the book is Freedom one. Life was over populated on Earth and a virus killed off a lot of life fast. So they rebuilt a safer society they think.

I would read more from Ilima Todd in the future. I would even like to go back and see what happens to Nine and life on Freedom one.

I was given this ebook to read from Net galley and Shadow Mountain. In return I agreed to give honest review and be part of Remake blog tour.

Thank you for the review!