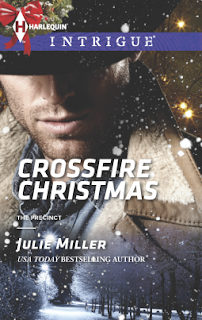 With his life bleeding out from bullet wounds and a car crash, Charles Nash's best option is to kidnap the innocent nurse who stops to help him. At gunpoint, the jaded DEA undercover agent offers Teresa Rodriguez a desperate deal: if she keeps him alive long enough to find out who's blown his cover and set him up to die, she'll be home for Christmas.

As the two go on the run from an unknown killer, the Good Samaritan gives Nash a bad case of unprofessional desire. He's drawn to the sexy little spitfire for her bravery, boldness and attitude. But how can he count on kissing her under the mistletoe when so many enemies are working to ensure they don't make it to the holidays?
Series: Harlequin Intrigue\The Precinct (Book 1530)


My review:Crossfire Christmas by Julie Miller (The Precinct)

Crossfire Christmas is full of suspense, action, romance, and some characters that have been in previous books. It also has a couple of love scenes that I skimmed over.

Charles Nash is a undercover DEA agent who has blown his cover. He was supposed to meet a young agent who had his go bag. They were ambushed and Charlie has been shot, other agent dead, a few bad guys too. He needs help but can't go to cops or hospital. Plus he is in strange city.

Teresa Rodriguez a nurse sees a truck that had slid off the road and was still running. She is the youngest of the Rodriguez and still babied. Teresa is taken by Charles by gunpoint and threats to her place. He wants her to sew him up and clean wound.

Charlie figures a mole has been in his office in Texas. He has lost three agents and now was set up too. He needs to find the mole and protect Teresa too.

I was not sure who the mole was. There were a few suspects that I thought might be it. I liked Teresa. She was smart, brave, feisty and wants to help others. I loved Laila. She was so cute.

The love scenes were easy to skip over and were short.

The setting is Kansa city. The police building is the one who had the tornado hit it in a previous book of Julie's

I like how Julie writes. I have read a few of her books and enjoy them. I will read more of her works in the future.

I was given this ebook by Net Galley and Harlequin. In exchange I agreed to write honest review of it.