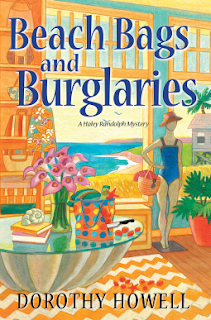 Description
Part-time sleuth and full-time fashionista Haley Randolph just won an all-expenses-paid vacay at the Rowan Resort, a ridiculously exclusive island getaway that caters to the whims of millionaires, royalty, and Hollywood A-listers. With her three BFF's--Marcie, Bella, and Sandy--along for the ride, the only thing she's missing is the Sea Vixen, the season's hottest beach bag. . .


The island has everything Haley imagined: pristine beaches, posh accommodations, and possibly Brad Pitt. But trouble soon looms on the horizon when Jaslyn Gordon, a maid at the island resort, goes missing. And while practically looting the resort for a Sea Vixen beach bag, Haley of course finds the maid--on the beach. . .and clearly dead.


Everyone at the resort says Jaslyn's death was just an accident, but Haley thinks there's a lot going unsaid. . .especially when she spots hunky FBI agent Luke Warner. He claims to be on the island only for a wedding but Haley's not buying it.


Haley's faced down clever criminals before and always come out on top, but this malicious murderer might be too crafty. And though she's dying to get her hands on a Sea Vixen, she also wants to live long enough to be seen with it!
Series: A Haley Randolph Mystery

This is a fun cozy mystery. This is the first Haley Randolph book that I have read. Haley is obsessed with getting the hottest beach bag. It is a clean read. It was pretty good on who was doing what crime.

Haley loves fashion. Her boyfriend had broken up with her. So she had won a vacation at resort and brought her 3 good girlfriends.
They are not going to talk about guys. She keeps a lot of secrets from her friends. Every time she turned around she was talking to different guy she was attracted to.

Haley on first day finds the missing Jaslyn body. The two detectives think that she might know more about them.
Haley is determined to find out who the murder is.

The setting for this book is a island off from California. The only way to get onto the island is from the private helicopter or the supply boat. So the murder is still on the island.

Their is a lot of mentioning history with different men in her life that is a long story so feel a little bit of lost because never read the seven other books.

It seems Haley is a little shallow the way she says one thing and does another. She keeps mentioning her want for the hottest bag, or her new clothes she put on credit cards. The way she talks about different guys in her life. How she tries to walk away from people calling her name like she does at work all the time.

It is meant to be a light hearted mystery.

I was given this ebook to read by Harlequin and Kensington. I agreed to give honest review of Beach Bags and Burglaries.