Slaves of Socorro (Brotherband Chronicles) by John A. Flanagan 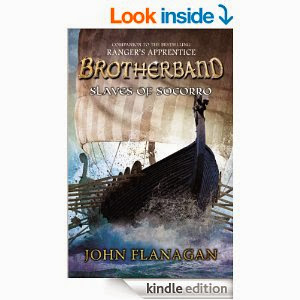 Hal and his fellow Herons have returned home to Skandia after defeating the pirate captain Zavac and reclaiming Skandia's most prized artifact, the Andomal. With their honor restored, the Herons turn to a new mission: tracking down an old rival turned bitter enemy. Tursgud—leader of the Shark Brotherband and Hal's constant opponent—has turned from a bullying youth into a pirate and slave trader. After Tursgud captures twelve Araluen villagers to sell as slaves, the Heron crew sails into action . . . with the help of one of Araluen's finest Rangers!

In this fourth book in the Brotherband Chronicles, a new battle unfolds as old rivalries are renewed, peace treaties are put to the test, and the action builds to a pulse-pounding finale. Perfect for fans of J.R.R. Tolkien’s Lord of the Rings, T.H. White’s The Sword in the Stone, Christopher Paolini’s Eragon series, and George R. R. Martin’s Game of Thrones / A Song of Ice and Fire series
File Size: 3962 KB
Print Length: 480 pages
Publisher: Philomel (July 15, 2014)
Series: Brotherband Chronicles (Book 4)


My review:Slaves of Socorro (Brotherband Chronicles) by John A. Flanagan

I admit that I like to read John A. Flanagan Brotherband Chronicles and Ranger Apprentice books. I was excited to find this book was releasing today and read it. It did not disappoint at all. The Heron crew are all familiar characters from other books. Hal gets asked to take the duty ship a year service in Araluen.

On the way they realize that their old foe is turning mean and becoming a pirate. As they rescue a ship he attacked and left to sink.
A ranger Gilan comes with a message from the King asking the Heron's crew to the palace before they can leave they find out that Tursgud has raided a nearby village and has taken 12 Araluen's to sell as slaves. So Gilan joins the Heron's crew to save 12 and stop Tursgud.

Gilan is a familiar character if you have read the Ranger's Apprentice books. If not read them they are good.

There is one other new character that joins the crew that adds a lot of humor to the story.

There is lots of drama, action and humor. You are drawn into the story right away and kept their. Lots of ship talk but he has a glossery at front of book for reference. Good clean story. A book for the whole family to read and enjoy.

This book could stand alone but is better if you have read the other three books in the series.

I know I will be back to buy the next in the series that comes out in Dec.Scorpion Mountain.
I bought this on Amazon.
Posted by rhonda1111 at 5:56 PM