Operation Zulu Redemption: Out of Nowhere - Part 2 by Ronie Kendig 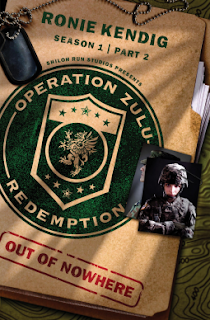 
Zulu races around the world fighting for answers—and their lives! The remnant of the first all-female Special Forces team, Zulu, will do whatever it takes to determine what really happened that night five years ago—when a trap entangled the team in the deaths of twenty-two innocent people in Misrata, Libya. With Lieutenant Colonel Trace Weston and Boone Ramage leading the way, Annie Palermo, Téya Reiker, and Nuala King are training harder and stronger, digging deeper for clues, and tracking down leads in the U.S. and Europe to clear their names. Former Navy SEAL Sam Caliguari refuses to believe Annie left of her own free will, not after what they shared. But his determination and efforts to find her have put Zulu at greater risk of being discovered—and eliminated—before they can find the truth. Francesca Solomon is determined to bring down Trace Weston, whom she believes is responsible for the tragedy in Misrata, for ruining her father’s career, and for tarnishing her family’s good name. When a source gives her pivotal information, Francesca leaps at the chance to make Trace answer for his crimes. Just when things start to turn for Zulu, a member of the team is targeted by one of the world’s deadliest assassins. Then another vanishes. Zulu wants the truth, but they didn’t know it might cost every one of their lives.

Ronie Kendig will leave you needing the next!


My review: Operation Zulu Redemption: Out of Nowhere - Part 2 by Ronie Kendig

I had to wait two weeks for this book. I saw a email telling me I could get it and I put the book down I was reading and started this one, I know it is going to end in cliffhangers but I was surprised again. I was not ready to put the story down for another week.

I like how in front of the story they introduce the cast of characters again, their real name, the fake one they have been living under for past 5 years. When they are on a mission they get a number too. Plus some military terms and meanings. I have one kindle open and stay on names if I want to remember something about them while I read on different Kindle fire.

So Out of Nowhere does answer the cliffhangers from previous episode. With new ones they end on. Not just one, but cliffhangers. It is full of drama, action, suspense and danger. I just wonder how this will all be solved and turn out in the end. You are not sure who to trust.

Five years their was a special ops team trained of females. They were sent in with bad information and women and children died. A General was kicked out. The Zulu team was disbanded and were given fake id. and told to stay away from each other to be safe.

LTC Trace Weston has been searching to find out what really happened and why his team he trained were used. Now some assassins
killed two Zulu members, another is in the hospital in a coma. The remainder are ready to find out why now someone wants them dead.

This is a clean read but lot of violence and sad slums areas. It makes it a hard read to know people are having tough times. Ronie Kendig draws on your emotions. You care and worry about the characters. Talk about the characters and wonder how it is all going to turn out. Their are a few different story lines that I really wonder about especially Teya's. She was ready to join the Amish religion and let David court her. Now she is back as a soldier.

The setting for this episode has them in Virginia, Paris and Greece.

I will be waiting for the next episode.

I was given this ebook to read from Net Galley and Barbour Publishing, Inc. Shiloh Run Studios