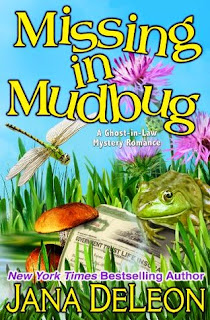 After an eventful first week on the job, Game Warden Jadyn St. James is happy the small bayou town of Mudbug, Louisiana, seems to have fallen back into its normal routine. But when FBI agent Raissa Bordeaux is kidnapped, Jadyn is certain the short-lived peace has come to an abrupt end. Statistics don’t lie, and Jadyn knows that the longer Raissa remains missing, the less likely she’ll be found alive.

Sheriff Colt Bertrand knows the FBI won’t let him participate in their investigation, but is certain the federal agents aren’t as qualified as he is to locate someone missing in the swamps surrounding Mudbug. And although he’s been avoiding the beautiful game warden, Colt is sure that teaming up with Jadyn gives him the best chance of finding Raissa.

With the clock ticking, Colt and Jadyn defy FBI orders and launch their search, but can they find Raissa before it’s too late

My review: Missing in Mudbug (Ghost-in-Law #5) by Jana Deleon

I love this series. It is light, fun cozy mystery. The characters I love.

The ghost-in-law is Helen. She reminds me of lucy in I love Lucy. Always causing a mess of trouble that makes you laugh. She wears weird outfits, she can't always control. She can't control sometimes if she has mass or not always at the wrong moments. She is always stealing food.
Only a few women can see her. Helen used to be rich.

Jadyn St. James is the new game warden. She is Maryse's cousin. She has not been to the area for too long. Has issues with her mother. She can see Helen.

Maryse Robicheaux was the daughter-in-law to Helen. She was the first to see and hear Helen at the funeral. They did not get along. Helen left her most everything because she knew Maryse would protect the land. She is now married to Luc a DEA Agent.

Sheriff Colt Bertrand is attracted to Jadyn. Colt is tricky. He wants to help find his friend even if she is not found in his area.

One FBI Agent was run over by hit and run on his way back to town. His wife another FBI Agent Raissa Bordeaux is missing. The two agents are married. They had just finished a undercover assignment.
The FBI Agent in charge wants everyone not FBI to stay out of the swampland. Maryse actually owns the land and leases it to the state. Jadyn has authority over the swamp. Colt figures out if he takes his vacation and can be a private contractor working under Jadyn they can search the cabins in the swampland and look to see if someone has been using one to keep Raissa.

I laughed a lot reading this book. I am glad to see more of these characters.
I bought it on amazon.
Posted by rhonda1111 at 9:02 PM