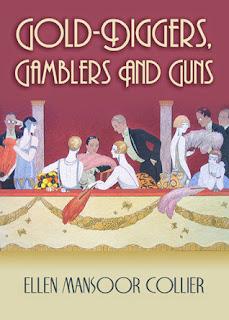 During Prohibition, Galveston Island was called the “Free State of Galveston” due to its lax laws and laissez-faire attitude toward gambling, gals and bootlegging. Young society reporter Jasmine (Jazz) Cross longs to cover hard news, but she’s stuck between two clashing cultures: the world of gossip and glamour vs. gangsters and gamblers.

After Downtown Gang leader Johnny Jack Nounes is released from jail, all hell breaks loose: Prohibition Agent James Burton’s life is threatened and he must go into hiding for his own safety. But when he’s framed for murder, he and Jazz work together to prove his innocence. Johnny Jack blames her half-brother Sammy Cook, owner of the Oasis speakeasy, for his arrest and forces him to work overtime in a variety of dangerous mob jobs as punishment.

When a bookie is murdered, Jazz looks for clues linking the two murders and delves deeper into the underworld of gambling: poker games, slot machines and horse-racing. Meanwhile, Jazz tries to keep both Burton and her brother safe, and alive, while they face off against each other, as well as a common enemy. A soft-boiled mystery inspired by actual events. 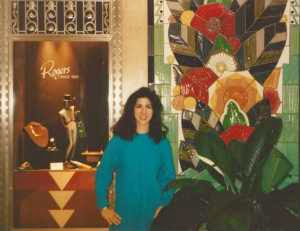 Ellen Mansoor Collier is a Houston-based freelance magazine writer and editor whose articles and essays have been published in a variety of national magazines. Several of her short stories have appeared in Woman’s World. During college summers, she worked as a reporter for a Houston community newspaper and as a cocktail waitress, both jobs providing background experience for her Jazz Age mysteries.

A flapper at heart, she’s worked as a magazine editor/writer, and in advertising and public relations (plus endured a hectic semester as a substitute teacher). She graduated from the University of Texas at Austin with a degree in Magazine Journalism and served on UTmost, the college magazine and as president of WICI (Women in Communications).

FLAPPERS, FLASKS AND FOUL PLAY is her first novel, published in 2012, followed by the sequel, BATHING BEAUTIES, BOOZE AND BULLETS, released in May 2013. She lives in Houston with her husband and Chow mutts, and visits Galveston whenever possible.

“When you grow up in Houston, Galveston becomes like a second home. I had no idea this sleepy beach town had such a wild and colorful past until I began doing research, and became fascinated by the legends and stories of the 1920s. Finally I had to stop researching and start writing, trying to imagine a flapper’s life in Galveston during Prohibition.”
Website: http://www.flapperfinds.com/


My review: Gold-Diggers, Gamblers and Guns: A Jazz Age Mystery #3

This is a wild time during Prohibition when the mobs are gaining power. A lot of policeman were on the take because they liked the money or did not believe in Prohibition. Their were two main gangs who were fighting for power on Galveston Island, TX.

In some ways I agree with Prohibition and other ways I don't. I personally don't drink, for religion reasons also my family has a history of abusing it.

The characters I like. They seem real to me. I never knew who to trust and who you could not trust.

Jasmine (Jazz) Cross is a young society reporter who wants to do hard news. She is also a half-sister to Sammy Cook, a owner of a speakeasy. She is dating Prohibition Agent James Burton. She is torn between the two sides.

Sammy Cook owns Oasis. He tries to stay on both mobs good side. He does not want it known that Jazz is his half sister. They only found out the last couple of years. Downtown Gang leader Johnny Jack Nounes is causing him to run dangerous errands for him.

James Burton is the only fed on Galveston Island. The police resent him. Someone wants to kill him. He is also framed for murder.

Jazz tries to help Burton and Sammy. Only a few people know why she is always concerned about her friend Sammy. How she always can get into his club the Oasis. Jazz really wants Burton to ask her to the policeman ball.

Lots of drama, choosing sides, action, and romance as they try to figure out who is trying to kill Burton and frame him for murder.
Which cops he can count on. Who killed other bar owner. Why are their betting chips found at all the crime scenes.

It holds your attention. I did not realize how many people had lost their lives on Galveston during the hurricane in the 1900's.

I have read two of the three books of the series now and like them both.

I was given Gold-Diggers, Gamblers and Guns so I could read and give them honest review and be part of its blog tour. All opinions are mine.


Check out the special excerpt from Gamblers, Gold-Diggers and Guns:

At the Rusty Bucket, I followed close behind, pretending I was a real crime reporter, looking straight ahead so the police and newshounds wouldn’t try to shut me out.

Sure enough, a couple of cops tried to block my way but I simply replied, “I’m with the Gazette,” as if that explained everything. When we entered the bar, I noticed obvious signs of a struggle: tables and chairs knocked over, broken glasses, papers strewn about. Right by the front door, in all its gleaming glory, sat a brand-new nickel slot machine, a one-armed bandit displaying diamonds, spades, hearts, horseshoes and a cracked Liberty bell.

A huddle of newshawks stared at the floor and I could see the figure of a man, lying by the new machine, arms at odd angles, but I was too far away to determine his cause of death.

“Coming through,” Nathan said, forcing his way into the circle . Edging closer, I could barely make out the victim’s face—a plain man in his mid-forties, sandy hair, freckled skin.

As I changed positions, I saw a huge gaping hole in his skull, hair caked with blood and bone. My stomach lurched and I covered my mouth with both hands, trying not to upchuck.

By the man’s side lay a bloodied baseball bat—the weapon of choice for thugs and cowards and enforcers who liked to use threats and intimidation to make their point. Why would the killers leave the bloody baseball bat in plain sight, next to the victim?

Across the room, Mack stared at me, stone-faced, with an “I told you so” glare. Feeling dizzy, I made my way across the room and sat down at a small table by the piano. No one seemed to notice as I went behind the counter, searching the ice-box for water. I gulped it down, then pressed the frosty glass against my perspiring face, enjoying the cool sensation.

Still shaky, I sat down at the table, observing the crime scene from a safe distance: the reporters taking notes, badgering the sheriff for information, an M.E. squatting by the body, taking samples of hair and blood. That’s when I saw it, half-hidden under the player piano bench: An almost-new Stetson, slightly scuffed, with a clean bullet hole in the crown.

Was I hallucinating or was that Agent Burton’s Stetson under the player piano? And what in hell was it doing at this murder scene?

July 20 – Cozy Up With Kathy – Interview

July 28 – Escape With Dollycas Into A Good Book – Spotlight

Thanks for hosting me today! I think you'd really like BATHING BEAUTIES as well--it leads right into GOLD DIGGERS. Enjoy!