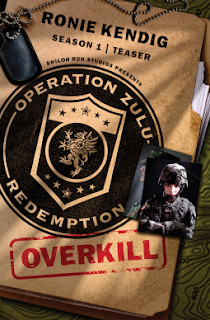 This is another serial book. This one is longer than the first serial from Shiloh Run Studios. It looks to be 6 episodes and longer than their first one. It started on July 4 and every Friday a new episode comes out.

In Overkill we meet the main characters of the series and start to care about them. It does have a few questions that hopefully be answered soon. Definitely left me wanting more of them.

At times it is a little confusing because each of the women that were part of the Zulu the first all women special forces team are in hiding. They have their birth name, the name they are hiding under and their code number. My answer to that I had two kindles and left one with front of story that had the characters and bio opened for quick glance, And then I read on my other kindle. but you could just book mark it unless you have no memory problems.

Someone set the Zulus up five years ago when things went wrong, Innocent women and children were killed. The Zulus were scattered and given different names. Now someone has found them and is picking them off one by one. It is a race to figure out what is happening now and stop them before it is too late for all of the Zulus.

This story is not afraid of killing the characters off. It draws you quickly into the story and leaves you wanting more. I know I am going to read the next episode today.

I want to see who is sending killers after the Zulus? Who is betraying them now and five years ago? Will Annie and Sam get together? Will Teya become Amish? Where is the missing Zulu? I really want to know the answers and more.

The setting for this story takes you all over because each of the women are hidden away from each other.

The pace of the book is very fast. Not boring or dragging at all.

Ronie Kendig writes novels that deal with military with characters and story lines that I have always liked. I look forward to reading Operation Zulu Redemption serial.

I was given this ebook for free and in return agreed to give honest review of it.
Posted by rhonda1111 at 10:59 AM