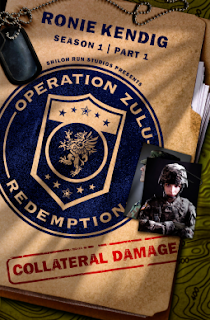 They want answers. They want redemption. And they want to live. Five years ago, six soldiers made American military history as the first all-female Special Forces team, named Zulu. A tragic mistake in Misrata, Libya, leaves twenty-two innocents dead and Zulu fleeing for their lives. Now Jessica Herring and Candice Reyna are dead at the hand of an assassin, and Keeley Shay clings to life in a hospital. The last three Zulu members are forced into a fight for answers, for redemption, and for their very lives. Annie Palermo and Téya Reiker had settled into their hidden identities when their lives are upended and their loved ones attacked. Annie’s flame, Samuel Caliguari, is a former Navy SEAL who can hold his own, but the attack leaves Annie livid—and fleeing once again. When Téya’s Amish loved ones are threatened, she must also hide. But how can she not go back and protect these peace-loving people, no matter the risk? Nuala King never really settled after Misrata, and she can’t shake the horror of the disastrous mission, the lives lost, or the terrible nightmares that still haunt her. Lieutenant Colonel Trace Weston and his right-hand man, Chief Warrant Officer Boone Ramage, struggle to hold the Zulu remnant together. They must track down who hit the team and deliver justice to the enemy—if Sam Caliguari and relentless Army intelligence analyst Lieutenant Francesca Solomon don’t get them all killed first. . . .


Start the mission with Operation Zulu Redemption: The Beginning

Ronie Kendig will leave you needing the next!

I was not ready for this episode to be over! I tried to see what the future episodes were about by reading on Amazon and they all say the same thing! So no helpful hints for me.

Lots of drama, action starts right from the beginning of Collateral Damage and goes till the end. The characters we learn a little more about them especially one of the deceased Zulu members Jamie. I like her apartment!

We meet a few new characters in this episode. Like Lieutent Francesca Solomon's family. She wants to prove that her father was innocent and place the blame on Trace Weston where she knows it belongs. She is sure he is guilty and thinks he is killing the women and covering it up.

The setting for this book is the United States. They go to a few different states from Washington to Nevada to Colorado.

We learn a little more about what happened five years ago. I know who I don't trust but it is probably a red herring this early into the series.

The women are ready to fight back.

There were cliffhangers from the Beginning and they were resolved besides the guilty parties ect. There are new cliffhangers in Collateral Damage. They leave you anxious to keep reading and being involved in their lives.

I like the characters. I don't know who I want Annie to be with. Teya wants to go back to the Amish life she left and that seems like it would be a big obstacle to overcome.

I was given this ebook to read so that I could give it a honest review of it by Net Galley, Barbour Publishing, Inc. Shiloh Run Studios
Posted by rhonda1111 at 7:16 PM