The Oleander Sisters by Elaine Hussey 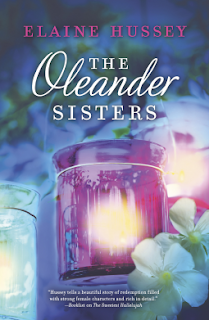 In 1969, the first footsteps on the moon brighten America with possibilities. But along the Mississippi Gulf Coast, a category five storm is brewing, and the Blake sisters of Biloxi are restless for change. Beth "Sis" Blake has always been the caretaker, the dutiful one, with the weight of her family's happiness—and their secrets—on her shoulders. She dreams of taking off to pursue her own destiny, but not before doing whatever it takes to rescue her sister.

Emily Blake, an unwed mother trying to live down her past, wants the security of marriage for the sake of her five-year-old son, Andy. But secure is the last thing she feels with her new husband. Now she must put aside pride, and trust family to help her find the courage to escape.

With Hurricane Camille stirring up havoc, two sisters—each desperate to break free—begin a remarkable journey where they'll discover that in the wake of destruction lies new life, unshakable strength and the chance to begin again. Dreams are reborn and the unforgettable force of friendship is revealed in The Oleander Sisters, an extraordinary story of courage, love and sacrifice.
Paperback, 352 pages

My Review: The Oleander Sisters by Elaine Hussey

This is not your everyday romance novel from Harlequin. It is a powerful novel in a lot of ways. Deals with strong woman characters. With abuse, single mothers, dreams, natural disaster, hurricane Camille.

The setting for this book is 1969 in Biloxi, Mississippi.

They watch man step onto the moon and it makes a little boy dream of building a rocket out of boxes and going to the moon. Andy is only five. He is darling and will still your heart. I love all the people helping him dream.

Emily Blake got pregnant in high school. The father ran off to war instead of doing what is right. Now she is engaged to be married and her son will have a new father. She has taken over a lot of the baking and cooking at the café now.

Beth "Sis" Blake is the oldest of the three children. After their parents were killed in a car accident they were raised by their grandma. Beth is a plain woman and never expects to get married. She is their taking care of her family.

Jim comes home wounded from the war. Mentally and physically. He is Emily's twin.

Sweet Mama owns a pie shop & café. Her husband left her to raise her own sons. Then she raised her grandchildren. Now she is forgetting things and trying to hide it.

Beulah is her best friend for years. Her husband brought her home to be a maid before the depression. They have lots of secrets over the years. She loves the Blake family and will do anything for them.

This book is full of drama, secrets, and love for each other as they go through trials in their lives.

This is my first book I have read of Elaine Hussey but I would read another book from her based on this book.

I was given this ebook to read by Net Galley and Harlequin. In return I agreed to give a honest review of it.