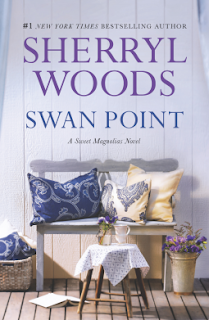 Determined to build a new life for her family after her divorce, Adelia Hernandez has bought a home in the historic Swan Point neighborhood of Serenity. Promoted to manager of Main Street's most fashionable boutique, she feels revitalized and ready for a fresh start as a single mom. But barely into this new independent phase, she crosses paths with the sexiest man to hit Serenity in years.

Gabe Franklin, back in town to make amends for past mistakes, has no intention of settling down, but Adelia's proving irresistible. Cheered on by their friends, "the Sweet Magnolias," Gabe is bringing long-absent passion and laughter into Adelia's life. To his surprise—and hers—sometimes a rolling stone is just what it takes to build the rock-solid foundation of a family.

"Woods' readers will eagerly anticipate her trademark small-town setting, loyal friendships, and honorable mentors as they meet new characters and reconnect with familiar ones in this heartwarming tale." —Booklist on Home in Carolina
Series: A Sweet Magnolias Novel (Book 11)

My Review:Swan Point by Sherryl Woods (The Sweet Magnolias #11)

Swan Points has a community of characters that I really like. It also has lots of gossip, everybody knows what you are up to. Some times it is helpful others it does a lot of harm. It deals with divorce and abuse. I like the plot. it is full of drama, relationships and romance. It is also a clean read.

Adelia Hernandez is Catholic and newly divorced. Her family is not too supportive of her getting a divorce. She has four children. She works in a store on Main street that sells clothes. She just bought a old home called Swan Point that needs some work.

Gabe Franklin has come back to his hometown to work for his cousin as a contractor. He was a troubled teen always getting into fights over protecting his mom. People would gossip about her and it might have been true but he still did not like hearing about it.

I really like Adelia's four children. She has three daughters and one son. They want attention from a father in their lives.

I think divorce is too easy to get now days and people find it just easy to give up. But in cases like Adelia where her husband does not want to try and work it out. Having affair after affair and flaunting in front of his children then the marriage is over or in the case of abuse.

I like how the women of the town are supporting of each other and willing to help where they can. They might gossip but they don't mean to be mean.

The setting for the book is a small town called Serenity, North Carolina. I would like to visit
Serenity and see all my favorite characters again.

I was given this ebook to read and asked in return to give a honest review of the Swan Point.
Posted by rhonda1111 at 1:59 PM