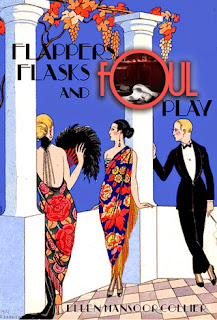 Jasmine Cross, a 21-year-old society reporter, feels caught between two clashing cultures: the seedy speakeasy underworld and the snooty social circles she covers in the Galveston Gazette. After a big-shot banker with a hidden past collapses at the Oasis—as speakeasy secretly owned by her black-sheep half-brother, Sammy Cook—Jazz suspects foul play. Was it an accident or a mob hit?

Soon handsome young Prohibition Agent James Burton raids the Oasis, threatening to shut it down if Sammy doesn't cooperate. Suspicious, he pursues Jazz, hoping for information (and some romance), but she refuses to rat on Sammy.

As turf wars escalate between the Downtown and Beach gangs, Sammy is accused of murder. To find the killer, Jazz must risk her life and career, exposing the dark side of Galveston’s glittering society. Now available in a revised trade paperback version with a glossary of 1920s slang. See the sequel: "Bathing Beauties, Booze and Bullets," published in May.)
File Size: 2340 KB
Print Length: 327 pages
Sold by: Amazon Digital Services, Inc.
Language: English
ASIN: B008QRJ0XM

It took me a few chapters to like some of the characters, but by the end of the book I really did like them. It was during prohibition and the times were wild. I learned some new things and was shocked by some events are government did.

Jasmine Cross is 21 year old society reporter who goes hangs out it a speakeasy. She is familiar with most of the workers there.
She wants to be a real reporter but no one takes her seriously. She is around a few crime scenes first so she starts to dig in. The speakeasy is owned by her black-sheep half-brother Sammy Cook. Which is a secret.

Prohibition Agent James Burton raids Oasis a few times. He looks like a creep at first. He is interested in getting to know Jasmine. He also wants to know she is at the Oasis a lot and so interested in what happens to Sammy.

Sammy Cook owns the Oasis. A speakeasy. He is arrested for murder that happened right in front of the Oasis. He does not want it known that Jasmine is his half-sister to protect her.

The setting is Galveston, Texas during prohibition. There are two gangs that are trying to claim territory. Someone is passing bad moonshine around that is causing deaths.

This is the first book in the series and the first part of story has a slow set up letting us learn about the characters and what the time was like. After that the story moves along at a good pace. Full of drama, action, crime and letting us see what that time period was like.

I was given this ebook to read for purpose of reviewing it and give my honest opinion of the story.
Posted by rhonda1111 at 10:43 PM

Thanks for featuring FLAPPERS! BTW none of the links appear to be working...E