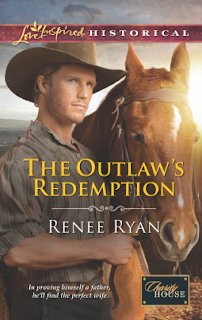 Description
CLAIMING HIS CHILD
Who would guess the most formidable adversary former gunslinger Hunter Mitchell ever faced would be a fiery, violet-eyed female? Now that he's served his time, Hunter intends to claim the daughter he's only just discovered. While the law is on his side this time, his daughter's devoted aunt certainly isn't.

Annabeth Silks can't bear to let a onetime outlaw take little Sarah. As the daughter of an infamous madam, she knows the hardship of an unstable home. But every glimpse of Hunter's reformed character dares Annabeth to look beyond his past...to the family and future she never thought to find
Series: Love Inspired Historical

My review: The Outlaw's Redemption by Renee Ryan (Charity House #6)

I am reading these backwards it seems. They are still good. This is a good clean romance. It has a emotional plot, with charming young girl Sarah. The characters are a good mixed bag. Does talk about the scriptures and how they made a change.

Hunter Mitchell has spent the last two years in prison for killing the outlaw who killed his second wife. He received a letter a month before he got out saying he had a 9 year old daughter. Hunter headed right for his daughter when he was released.

Annabeth Silks has spent the last year teaching school at Charity House teaching school to be with her niece. She wants to make a life for them. Her mother wants her to go back east again.

Sarah is nine years old. She has been raised in Charity House. Her mom hid her from her husband and Aunt.

Hunter wants to turn his life around. He wants to be a father to Sarah. He also knows that her Aunt is important in her life too.

Charity House takes care of orphans or children of prostitutes. They raise them up with church and school. With lots of love too.

The setting is Denver Colorado 1890

I have at least one more book about Charity house on my kindle that I am excited to read soon.

I was given this ebook from Net Galley and Harlequin. I agreed to give honest review of it.