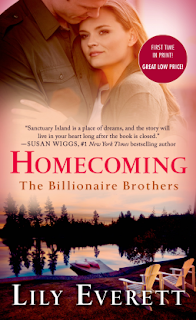 Description
Three billionaire brothers are about to discover exactly where they belong, in this romance from Lily Everett.
Billionaire brothers Dylan, Logan, and Miles Harrington have everything they could ever want…except love. Now they’re about to travel to the magical, windswept refuge of Sanctuary Island where they’ll discover that power, fame and fortune don’t mean a thing without someone to share it with.
Homecoming

Dylan Harrington, the infamous "Bad Boy Billionaire," decides to escape his life of scandalous escapades for some R & R on Sanctuary Island. He never expects his harmless flirtation with a waitress at the Firefly Café to make him long for a simpler life. For his brother Logan Harrington, it takes a visit to Sanctuary lsland to make him recognize his true feelings for his assistant Jessica. And when eldest brother Miles travels to Sanctuary Island to knock some sense into his love struck siblings, he doesn’t expect to be blindsided by lifelong local Greta. Can the jet-setting billionaire whisk a small-town girl away to his life of luxury…or will the homey pleasures of Sanctuary Island win him over first?
An incredible story of love, forgiveness, healing, and joy."—Debbie Macomber, #1 New York Times bestselling author on Sanctuary Island
File Size: 697 KB
Print Length: 351 pages
Page Numbers Source ISBN: 1250054494
Publisher: St. Martin's Paperbacks (July 29, 2014)
Series: The Billionaire Brothers

Homecoming is three novellas about the Harrington brothers finding romance one after another on Sanctuary Island. So knowing right off that they are short stories I shouldn't complain about it. So yeah I would be happier with longer stories. This is the only book that I have read by Lily Everett. I will read more from her in the future.

I like the three brothers. They are not close to each other. They are willing to be better at it.
Dylan Harrington is the youngest. At 8 years old he lost his parents. Then his brothers went off to college and he got sent to his grandparents. His name in press is Bad Boy Billionaire. He is tired of that life and decides to go to his grandparents house on Sanctuary Island. When he is mistaken for the handyman to fix the house he goes for it.

Logan Harrington is brought to Sanctuary Island by his assistant to get better. He is very smart but works all hours. He was 14 when his folks died and decided to enter college then.

Miles Harrington comes to Sanctuary Island to take care of Dylan wanting to get married to a waitress he has only known for three weeks. Miles took over the family business after college.

The woman they are attracted to don't want them for their money. They are strong women who also know how to forgive and love them.

I like Dylan's story the best. I would not climb that high on Empire State building. But would love to fly around New York on helicopter.

The setting is Sanctuary Island is off the state of Virginia. It is very small town feel to it. Also has wild horses on it.
This is a good book if you don't have a lot of time to read. It is a good romance.

I was given this ebook by Net Galley and St. Martin's Press and in return agreed to give honest review of it.
Posted by rhonda1111 at 5:54 PM