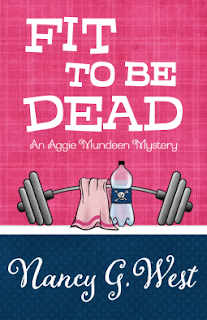 “Fit to Be Dead has it all: intriguing characters that point to romance, an engrossing plot, a compelling puzzle and well-disguised clues—a fun read.” – L. C. Hayden, Award-Winning Author of the Harry Bronson Mystery series

Aggie Mundeen, single and pushing forty, fears nothing but middle age. When she moves from Chicago to San Antonio, she decides she better shape up before anybody discovers she writes the column, “Stay Young with Aggie.” She takes Aspects of Aging at the University of the Holy Trinity and plunges into exercise at Fit and Firm.

Rusty at flirting and mechanically inept, she irritates a slew of male exercisers, then stumbles into murder. She’d like to impress the attractive detective with her sleuthing skills. But when the killer comes after her, the health club evacuates semi-clad patrons, and the detective has to stall his investigation to save Aggie’s derriere.
Series: An Aggie Mundeen Mystery

Part of the Henery Press Mystery Series Collection, if you like one, you'll probably like them all...

Nancy G. West’s poem, “Time to Lie,” was featured by Theme and Variations and broadcast on NPR. For three years, she wrote Book Shelf, the book column for San Antonio Woman magazine as well as articles for other publications.

But a funny thing happened as she finished Nine Days to Evil, her award-winning novel of psychological suspense, Shakespeare, and nonstop-action. A supporting character, Aggie Mundeen, with her wry sense of humor, took over West's consciousness and demanded that West write a book about her…or maybe a series. The result, Fit to Be Dead, was 2013 finalist for the Lefty Award for Best Humorous Mystery. Next came Dang Near Dead, and West is currently at work revealing Aggie’s third and fourth romantic mystery adventures. Aggie is pleased.

Fit to Be Dead is an entertaining story. It keeps up the suspense of who the murder is till revealed. Some points of the plots seem weak. Has humor. the characters are likeable and would love to see more. Also clean read.

Aggie Mundeen is single and almost 40. She is back in college. She also writes a newspaper column Stay Young with Aggie. She wants to solve a murder to impress a detective.

Aggie goes to Fit and Firm Health Club to try and get in shape. She has a eventful first day. She meets a lot of guys who flirt with her. She also finds and help save a life Holly.

Weak part for me was that she thinks she might have been poisoned at a health club so she takes some containers of different things and takes to lab for testing. She does not tell her cop friend and warn people about products. Also she goes through a lot of steps to lose the cop watching her house to keep her safe.

Holly Holmgreen someone caused her to be almost killed in the swimming pool. If Aggie had not gone over to meet her and realized that she was not breathing and got her help so fast.
Aggie has lots of suspects for who she has offended lately.

I would read another Aggie Mundeen mystery in the future.