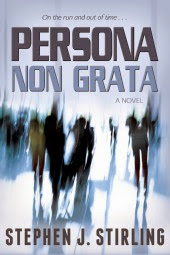 Paladin Smith is in Eastern Europe- and way out of his element! Sent to war-threatened Crimea to find and bring home a rebellious former student, Paladin soon finds himself in the midst of foreign intrigues and international conspiracy. A simple task is about to turn into a political and spiritual action adventure that will alter Paladin’s life – and change the world.
Paperback: 224 pages
Publisher: Cedar Fort, Inc. (July 8, 2014)
Language: English
ISBN-10: 1462114504
ISBN-13: 978-1462114504

Stephen J. Stirling was born in Los Angeles, California and grew up in the Southeast LA semi-ghetto of Huntington Park. Graduating from high school in 1970, he received a scholarship to Brigham Young University at the age of 17. He earned a Bachelor’s Degree in Journalism in 1976, and then spent the next few years wandering America in search of adventure. Interspersed through his college career and days on the road, he served a mission in Chile and taught for 8 years as an early morning seminary teacher. Settling briefly in Chicago, he entered the profession of advertising, a field in which he ultimately held many positions with companies from the Mid West to the Pacific Coast. He eventually planted roots in Orange County, California, where he established Stirling Communications and spent 15 years as a freelance copywriter, scriptwriter, and video producer. In 1994 he was hired by the Church Educational System and relocated with his family to Gilbert, Arizona, where he has fulfilled a lifelong dream of teaching released-time seminary for the past 20 years. He and his wife, Diane, were married in 1981 and are the parents of five children – Jennifer, Lindsey, Brooke, Marina, and Vladimir. Brother Stirling is the author of several books, including The Ultimate Catalogue and Shedding Light on the Dark Side.

I loved it. Had to stay awake till I was done reading at 1:30 am. I like Paladin Smith. Most of the other characters too, though some I did not like which ones I was supposed too.

Persona Non Grata is a exciting adventure. LDS beliefs, and values were shared. They were also explained terms people might not know in different ink on my ARC ebook. Though the book is fiction a lot of things were right about the hot bed of trouble in the former Soviet Union. Dramatic, spiritual, action packed novel.

Paladin Smith is a seminary teacher and history teacher. He has been married for three years. I would have liked to have had him as a teacher. He cared about his students out of the classroom too. He is asked by someone he does not respect too go to Crimea and help his former student get out of trouble.

I liked how he went and talked it over with his wife and father before he decided what to do.

Paladin is not what you expect from a thriller hero. He follows his conscience and the spirit. He asks for help through prayer, he respects people and their beliefs.

The setting of the book was loosely set in Crimea. With Russia's army to go and take back the country. He started writing this 5 years ago. Before Russia really went in with its army into Crimea.

I would love to see Paladin again. If you want a good clean exciting thriller than read Persona Non Grata.

I was given this ebook to read from Cedar Fort and agreed in return to give honest review of it and be part of its blog tour.

From author: This excerpt is the book’s prologue. Any explanation would betray the test of the passage: Can it stand alone? Hopefully, it not only does so but intrigues the reader to want to read more.

The American stood erect on the forward deck of the Russian yacht. Cloaked in the shadows of the night, he stared silently over the dark expanse of the Black Sea. Impeccably attired in a dinner tuxedo, he wore the confident expression of a man in control of his world—with the cynical smile of one who intended to retain that control at any cost. He laughed softly to himself and gripped the railing. Under his feet the yacht churned at leisure through the water as waves lapped against the bow. Breathing deeply of the Crimean air, he felt himself at one with the luxury craft—the perfect blend of elegance, power, and heartless drive.

He shifted his weight ever so slightly as the yacht rocked on the surface of the water. Like himself, the ship had no sympathies or loyalties. Built of cold steel and lifeless wood, it was designed for self-indulgence, pleasure, and the display of ambitious superiority. And anything that lay in its course beyond the bow it would crush and send sinking to the bottom of the sea. He smiled again and peered contemptuously into the black distance, defiant of anything that would come into his path.

Behind him a steward cleared his throat. “Sir, the secretary will see you now.”

The American turned emotionlessly and walked past the steward to the staterooms. He knew his way to the cabin occupied by the Russian official who waited for him. He opened the door and entered without knocking.

A distinguished, gray-haired Russian stood behind a large desk. He was only slightly surprised at the insolent air of his American guest. “Mr. Ambassador,” he greeted him without smiling. “Sit down, please. I apologize for not welcoming you sooner. I’ve been on the telephone with our patron.”

The Ambassador nodded and sat in a cushioned chair. “Please relay my compliments to your president. His yacht is magnificent. I’ve been admiring the horizon.”

“Indeed?” The man behind the desk cocked an eyebrow. “What horizon can you possibly appreciate at midnight?”

The guest smiled. “I’ve learned that the cover of darkness always provides a superior view, providing one knows precisely what lies in the waters ahead.”

“You come to the point quickly,” said the Russian, taking his seat. “That is, of course, the reason I am here—to verify that we do know what is just ahead. We venture into perilous ‘international’ waters.”

The American leaned forward. “Mr. Secretary, our course is perfectly set. We know exactly where our vessel is going. Every detail of our voyage has been flawlessly arranged.”

“As per our discussions, I am sure.” The secretary shifted in his chair. “Your services and contacts have been invaluable. My president merely wants to make sure that there will be no interference from NATO or from the United States.”

“Your president should know better,” the visitor soothed. “He is well aware how the wind blows in America these days. There will be no intervention from the United States, the United Nations, or anyone else. In seven days the Russian Federation will be some two percent larger than it is today. And I will be some five hundred percent richer than I am today. But how uncouth! Who can put a price tag on patriotism or other noble aspirations of the heart?”

The Russian was stoic. “Setting aside the American sarcasm, my friend, Alexander Trotsky seeks a final assurance that we will encounter no unforeseen obstacles.”

“You may give Alexander Trotsky my personal pledge,” said the American as he casually lit a cigarette. “Every element in our little drama is in place—like the pieces of a brilliantly played game of chess. The checkmate is certain. There is no man on earth and no power in the universe that can stand in our way.”