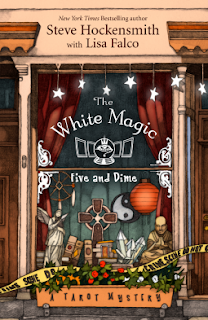 A murdered mother leaves a shop full of secrets

Much to Alanis McLachlan’s surprise, her con-woman mother, Barbra, has left her an inheritance—The White Magic Five & Dime, a new-age shop in tiny Berdache, Arizona. Reluctantly traveling to Berdache to claim her new property, Alanis decides to stay and pick up her estranged mother’s tarot reading business in an attempt to find out who killed her. With help from a hunky cop and her mother’s live-in teenage apprentice, Alanis begins faking her way through bogus tarot readings in order to win the confidence of her mother’s clients. But much to her surprise, the more she uses the tarot deck, the more Alanis begins to find real meaning in the cards
Series: A Tarot Mystery (Book 1)

It was good mystery, I had no clue to a bunch of stuff but other things I figured out early. The Tarot cards I am not familiar with at least Alanis McLachlan has a book to learn from. I liked the characters. Did not think to much about Alanis mom.

Alanis McLachlan's mother died and left her everything. She had not seen her mom in twenty years and they were both using different names at the time. It was not a happy parting of ways.

Alanis goes to the small Arizona town where her mom was murdered. She is surprised at what she finds. She decides she is going to help find her mom's killer and make right what she can.

The setting Berdache, Arizona it is a small town. It has one vortexes. Lots of people who believe in them.

Alanis is a telemarketer. She uses her training as a con artist to sell things. She does not like what her mom does. She is not even sure what her real name is.

Clarice Stewart is a seventeen year old who live with Alanis's mother. Clarice never heard that Athena had a daughter. Clarice worked for Athena. She won't talk about where she came from.

Athena or Barbra What ever her name was. She was a con artist Not much of a parent.

I would like to read another book in the series and see where it goes from here.

I was given this ebook to read in exchange for honest review of it by Netgalley and Midnight Ink.
Posted by rhonda1111 at 5:07 AM