The Hexed by Heather Graham (Krewe of Hunters #13) 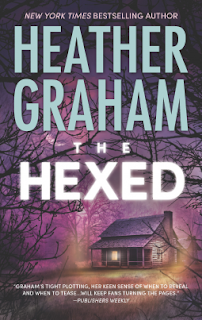 A place of history, secrets…and witchcraft.

Devin Lyle has recently returned to the Salem area, but her timing couldn't be worse. Soon after she moved into the eighteenth-century cabin she inherited from her great-aunt Mina—her "crazy" great-aunt, who spoke to the dead—a woman was murdered nearby.

Craig Rockwell—known as Rocky—is a new member of the Krewe of Hunters, the FBI's team of paranormal investigators. He never got over finding a friend dead in the woods. Now another body's been found in those same woods, not far from the home of Devin Lyle. And Devin's been led to a third body—by…a ghost?

Her discovery draws them both deeper into the case and Salem's rich and disturbing history. Even as the danger mounts, Devin and Rocky begin to fall for each other, something the ghosts of Mina and past witches seem to approve of. But the two of them need every skill they possess to learn the truth—or Devin's might be the next body in the woods….


My review: The Hexed by Heather Graham (Krewe of Hunters #13)

I like Heather Graham's writing and love the Krewe series. This one I just did not connect to the characters as much. Could just be my mood. The suspense was good and keeps you guessing with lots of suspects. A couple of love scenes easy to skip if you want. Lots of history of Salem.

Craig Rockwell is a FBI Agent and asked to join the Krewe and work on a case near where he grew up. Thirteen years before he discover a friend murdered just like the new one in Salem. He heard his dead friend asking for help.

Devin Lyle writes children books about a witch. She just moved back home and lives in her Deceased Aunts home. She finds a new murdered women close to her house. She lives in a house in the woods that are haunted some think. She is single.

There is a murder that is just like the one 13 years ago. Details were kept secret. Now no clues are found. Everybody that was around 13 years ago and now is a suspect. Craig or Rocky suspects his friends that were with him when they found the body. There are things about the murder that draws from history of the Salem Witch trials.

One of the victims they have no idea who she was and why she was picked.

The setting is Salem. Lots of history of what life was like and what happened back at the witch trials.

I was given this ebook to read and in return agreed to give honest review.
Posted by rhonda1111 at 9:55 AM