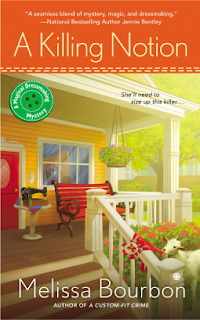 Harlow Jane Cassidy is swamped with homecoming couture requests. If only she didn’t have to help solve a murder, she might get the gowns off the dress forms….

Harlow is doing everything she can to expand her dressmaking business, Buttons & Bows—without letting clients know about her secret charm. When she has a chance to create homecoming dresses with a local charity and handmade mums for several high school girls—including Gracie, whose father, Will, has mended Harlow’s heart—she is ready to use her magical talents for a great cause.

But when Gracie’s date for the dance is accused of murder, Harlow knows things won’t be back on course until she helps Gracie clear the football player’s name. If Harlow can’t patch up this mess before the big game, her business and her love life might be permanently benched. 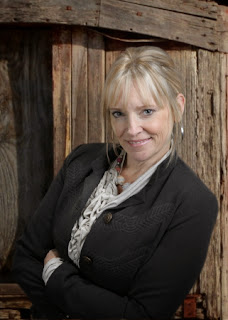 Melissa Bourbon, who sometimes answers to her Latina-by-marriage name Misa Ramirez, gave up teaching middle and high school kids in Northern California to write full-time amidst horses and Longhorns in North Texas. She fantasizes about spending summers writing in quaint, cozy locales, has a love/hate relationship with yoga and chocolate, is devoted to her family, and can’t believe she’s lucky enough to be living the life of her dreams.

She is the Marketing Director with Entangled Publishing, is the author of the Lola Cruz Mystery series with St. Martin’s Minotaur and Entangled Publishing, and A Magical Dressmaking Mystery series with NAL. She also has written two romantic suspense novels, a light paranormal romance, and is the co-author of The Tricked-out Toolbox, a practical marketing guide for authors.


My Review: A Killing Notion by Melissa Bourbon( A Magical Dressmaking Mystery #5)

What a fun murder mystery. This is book #5 of A Magical Dressmaking Mystery series. But only one I have read yet. Now I want to go and read the first 4 books of the series sometimes. Harlow Jane Cassidy has charms. Her whole family has different charms.
Harlow's clothes she makes for people make their dreams come true. Harlow even has a ghost who is still a matchmaker.

Harlow is busy getting ready for Homecoming. She is making a couple of dresses and lots of Mums for it. I had never heard of tradition of mums for proms there in Texas. They are big and lots of ribbons and trinkets on them. Can be 30lbs and ribbons can go length of dress.

Harlow owns Buttons & Bows dressmaking. She is engaged to Will. She has helped solve murders before. Now she is asked to help again.

Will's daughter Grace boyfriend Shane has been accused for murdering his father. Harlow does not believe he is guilty.

Some of the secrets I guessed at before they were revealed in the book. Others I had no clues about.

The characters are likeable. They are well developed and seem real.

A Killing Notion does stand on its own. But I do think it would be better if you have read the other books in the series. At least that is what I am guessing. I want to know more about there pasts that have been revealed in previous books. Like how Harlow's grandmother set her up with Will while she was a ghost.

Glad you enjoyed the book! Thank you for featuring it :)