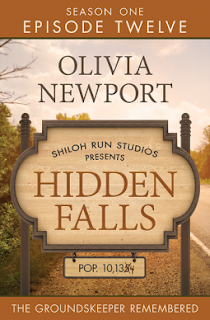 So much drama for such a small town. Two arrests on Main Street, with thanks to Dani and Liam. . . A medical emergency for Lauren. . . Family secrets held for generations finally revealed. . . The rekindling romance of Ethan and Nicole. . . Jack Parker’s surprising choices. Quinn has a lot to catch up on if he returns to Hidden Falls—no, when he returns, Sylvia is sure. But is he already back? Ethan is positive he accidentally captured Quinn’s image in the woods. But why would Quinn come back to town and not tell the ones who care about him most—the ones who’ve frantically worried over his disappearance? Frustration mingles with hope—and fear of foul play still looms.
File Size: 3630 KB
Print Length: 66 pages
Publisher: Shiloh Run Studios (April 4, 2014)
Sold by: Amazon Digital Services, Inc.
Language: English
ASIN: B00HX7CVMI


My Review:Hidden Falls: The Groundskeeper Remembered - Episode 12 by Olivia Newport

Some answers, more drama, more cliffhangers and more frustration when it ended and I was not ready for it to end so soon. If your a fan of Hidden Falls then you will want to get this episode. If your new to the series start at episode one.

By the title of this episode I was expecting something different that did not happen. When I was trying to guess where this episode would take me.

I want next week episode to come faster. I think I will want to read all the episodes in a row again to get the whole picture in my head. That's my memory problems.

We still have no real clue what or where Quinn is now or where he has been gone too.

There is finally arrest on the missing money.

Still don't know what will happen to Ethan's career. Or even if Nicole still has a job to go back too.

Still a clean story that is full of interesting characters and full of drama. With only one more episode left to this season. I will be sure to get that last episode as soon as I can.

I was given this ebook to read and in return agreed to give honest review of it.
Posted by rhonda1111 at 4:37 PM